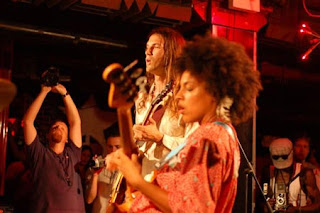 I am predicting that last night's Earl Greyhound show at Sokol Underground will be the "sleeper" show of the year. What I mean by that is that, though few people were there last night, by the end of the year, everyone will be talking about them. These guys (and gal) were freakin' stellar last night.

Things were kind of rough at first as the bass player's bass died just as they were going on. The two openers had already removed their gear so there was no bass for her to use. The club's sound man drove home in the snow and retrieved his personal instrument and brought it back. He saved the day. 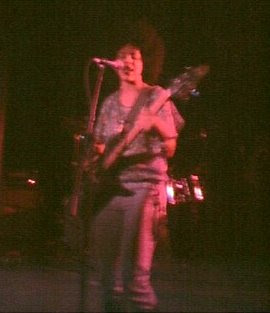 My crappy cell phone pic of the show
Once they finally got going at about 11:30, the crowd had dwindled down to about 25 or so. But it was an enthusiastic 25, and band knew this. Earl Greyhound played their nuts off (except for the member who had no nuts) for a full hour and rocked like they were playing a sold-out show at Madison Square Garden. I loved it.

), plus a few extras for an encore. If Earl Greyhound comes to wherever you live, make it a point to see them. It is almost like seeing a cross between Jimi Hendrix and Led Zeppelin, with a little soul thrown in for good measure. Their current tour is winding down, but they said they will be doing a lot more touring later in the year.

To all of you M. Ward and Tilly and the Wall-listening, indie hipsters that skipped this show -- you missed out. This could end up being show of the year, and all of you missed it. Hope you have fun at the tap dancing show next month.**

**this is extreme sarcasm. But my hatred for Tilly and the Wall is real.
Posted by Dave Splash