I'm Not Staring At Your Tits -- I'm Looking at Your Watch 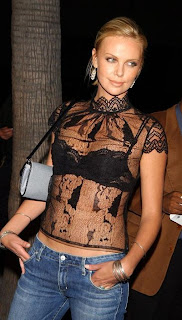 Seriously...is anyone looking at Charlize Theron going to notice what brand of watch she is wearing? Or if she's wearing a watch at all! Swiss watchmaker Raymond Weil seems to think so and they are suing Theron for breach of contract. She became a spokesperson for the company in 2005, and is supposed to only wear their watches when out in public. I guess she might have worn a Swatch or something, because Raymond Weil is pissed. Oops.

Is Audioslave over? I hope so.

I saw this live this morning and was hoping someone would post it. Chris Matthews was a phone-in guest on Imus in the Morning this morning and he dropped the F-bomb live on TV. ThinkProgress has the video.

The "celebrity" sex tape featuring Hollywood socialite Kim Kardashian (daughter of OJ Simpson attorney Robert Karsashian) has been purchased by Vivid Video for $1 million. Apparently she is doing it with some minor rap star. A website for the video has been set up here. (NSFW) This girl seems like a very minor celebrity. How is her sex tape worth a million dollars?

A bunch of whiny, Christian conservatives are complaining about Prince's performance at the Super Bowl. "Oh my god, it's like he's playing his penis! My children might have seen this! Why do they have to do this at the Superbowl?" And just when I thought the level of right-wing fake outrage could not get any higher...

The reunited Smashing Pumpkins will release their new album on July 7 (7-7-07). It will be called Zeitgeist. I say, who cares. Silversun Pickups do the "Smashing Pumpkins sound" better than the Pumpkins themselves have done since their debut album. They are probably a better live band, too.
Posted by Dave Splash

I'm a pastor's wife and I thought Prince's performance was FANTASTIC! I've loved him since back in the day when 1999 came out.

Church folk just need to get a freaking life!

BTW, your blog is really GREAT!

Thanks for the kind words. Yes, Prince was quite good, and someone could only find offense in that performance if they set out to do so. Sadly, that is what too many right-wing groups these days -- whine about being "offended."