If you are going to criticize Senator Joe Biden for his "racially insensitive" comments regarding Senator Barack Obama, then you must be consistent and criticize George W Bush for saying practically the same thing on the same day. Miraculous how the "liberal media" didn't pick up on this. Here is W from his interview with Fox News' Neil Cavuto:

CAVUTO: How do you think the troops would feel about a President Obama?

BUSH: Oh, I don’t know. He, let’s — he hasn’t gotten elected yet. He hasn’t even gotten the party’s nomination either. He’s an attractive guy. He’s articulate. I’ve been impressed with him when I’ve seen him in person. But he’s got a long way to go to be president. (watch the video here)

You know, Biden felt bad that he inadvertently offended people, and he called Senator Obama and apologized. Bush has yet to apologize, and NO ONE in the media has even asked him to. I don't see a dime's worth of difference between the two comments (except that one is a Democrat and the other is a Republican), yet there is a major double standard on what gets reported. 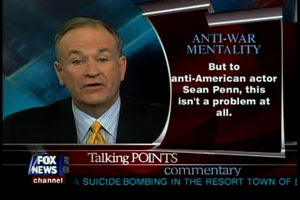 Only on Fox News: Just moments after after saying that anti-war protesters (in particular Sean Penn) are "anti-American," Bill "I Wish I Was a Loofah" O'Reilly then said, "You know that the Fondas and [Sean] Penns are going to say, ‘Listen, I’m as American as you are…I just see things differently.’ And I’m willing to give them the benefit of that doubt. I don’t want to say that they’re anti-American.” Which is it, Bill? Sounds like a flip-flop to me. (h/t: ThinkProgress)

The Strokes are going on "hiatus." Is this the end of the band? As much as I like them, I wouldn't really object to The Strokes calling it quits now.

Al Gore has been nominated for a Nobel Peace Prize for his work on climate change. The winner will be announced in October -- a perfect time for someone to announce their candidacy for President of the United States, don't you think?

Oh no, not again. Former Secretary of State Henry Kissinger (who consults regularly with Bush and Cheney) says the Bush Administration has a "secret plan" to end the Iraq War. If anyone believes this bullshit, you should surrender your right to vote immediately. This was the same silly strategy that Richard Nixon used in his 1968 campaign. His "secret plan" extended the war for another five years, and expanded it into two other countries. 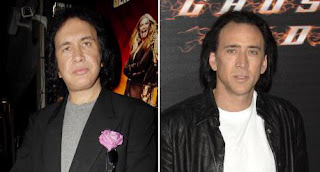 Has Nicolas Cage been cast as the latter-day Gene Simmons in some sort of KISS bio-pic? I haven't heard anything about that, but they are both sporting the same, lame hair style.
Posted by Dave Splash