You're Losing Me On This One, Keith

Countdown with Keith Olbermann is, without a doubt, the best news and political commentary show on television. Whether taking on George Bush, Donald Rumsfeld, or Bill O'Reilly, Keith is nearly always on point. I think that his "Special Comments" had a significant effect on the outcome of last November's election.

But on last night's show, Keith did a segment on the show 24 that I think is so ridiculous that it required a "special comment" from me. Keith had filmmaker Robert Greenwald (Outfoxed) as a guest, and the two advanced the theory that somehow 24 is designed as "propaganda" (a term used by both Olbermann and Greenwald) to benefit the Bush Administration. They referred to the show as a "neocon sex fantasy" and said that the entire point of the show was to keep people in fear (like Fox News) so they will support the outlandish actions of Bush, Cheney, et al. Greenwald argued that 24 helps sell the Administration's case for torturing detainees, because as Greenwald incorrectly argues, 24 shows that "torture works." Huh? Have you watched more than a highlight reel of the show?

I watch 24 every week with the same group of friends. We are all liberal. We all voted for Gore in 2000, and Kerry in 2004. We all oppose the Iraq War, and think the president lied to get us into the war. We all think Guantanamo should be closed down. Yet, we are all obsessed with 24. 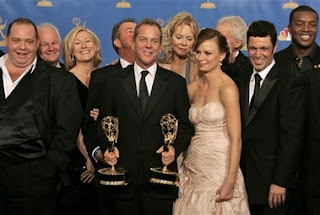 I guess Olbermann and Greenwald are attempting to make the case that since the show airs on the Fox Network (not Fox News), that somehow Rupert Murdoch is calling up Vice President Cheney for his input on the show. Look, Fox or NewsCorp or whoever is a massive conglomerate that cannot micromanage every single, little aspect of every show. It is a news company, that to my understanding, leaves the entertainment division alone. They just want to make a lot of money. So Fox is not always Fox. Should all liberals be weary of all 20th Century Fox movies? Should we stop watching The Simpsons? Are Rupert Murdoch or Dick Cheney secretly speaking through the "wisdom" of Homer Simpson? This is a dumb argument.

The right has made this type of argument for years, and I have always dismissed it. For example, right-wingers attempted to make the case for years that various shows are designed to "promote the gay agenda." These nutcases have cited shows ranging from Will & Grace to Teletubbies, as "proof" that the networks are trying to "brainwash" people (Olbermann, sadly, used the term brainwash in his piece on 24 also). Then how could a network -- let's say, ABC who made Will & Grace -- simultaneously be so liberal that they want to trick people into accepting gays, but also promote a TV series that attacks the Clinton Administration for inaction prior to 9/11 while praising the Bush Administration for their efforts (Path To 9/11). It was blatantly partisan. Same network. Same executives. Same financial backing. Different "agendas"?

24 has received numerous Emmys and other awards from the entertainment industry. This is the same industry that the right has whined about for decades as one that excludes conservatives, and promotes liberalism.

Just because Dick Cheney says he likes the show, that does not make it some right-wing propaganda piece. The show was created before 9/11, and before there was a Bush/Cheney Administration. Bill Clinton watches college football obsessively. Does that mean college football is promoting liberalism?

24 is an action show. It gets your adrenalin pumping, and it keeps you watching with numerous plot twists. The "morality" of the show is not cut-and-dry. Torture does not always "work" on the show. In fact, I think 24 goes to great lengths to show the toll that torture can take on the individuals involved with it. Jack Bauer is certainly no happy camper. He has no friends. He has no family. He spent the last two years in a Chinese prison. Plus the US government traded him to terrorists for information, and then gave the same terrorists $25 million on top of that!

Look at it this way...24 has gotten more and more popular over the last six years, while over those same six years, approval of George W. Bush and his agenda have sunk to almost unprecedented lows. If 24 is promoting the Bush presidency, then let's run it every night of the week to see if his approval numbers can get into the teens!
Posted by Dave Splash

I agree. I love Keith Olbermann, but this isn't a conspiracy. Your post is much better than mine at:

But I did manage to work in the show "Lidsville," which is digging deep.

Not familar with "Lidsville" is that part of the vast, left-wing conspiracy?

I also agree with you. 24 is just an action show set in our current world. If Arabs set off bombs here, Arabs will be rounded up. That's not propaganda...just a realistic vision of what may happen in our country.

Lidsville is a Sid and Marty Kroft show that was probably only one for 6 shows or so. It featured Charles Nelson Riley as "the Wizard of Hoodoo," in green grease paint. About as on target as Greenwald was. Too bad this will just cause more distraction from what is really at stake.