Some Quick Notes on the Bush Speech 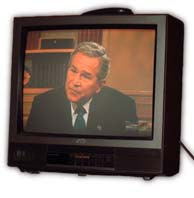 I just finished watching Bush's speech on Iraq tonight. It was basically, "stay the course a little more." There were no major mispronunciations that I noticed. I didn't hear anything new. I didn't hear anything that he hasn't already said in his previous 15 speeches on Iraq, except for...Iran. He did slip in a line about moving an additional carrier group or something to the Gulf to stop the Iranians from helping insurgents. I hope the Democrats have the balls to battle Bush for the next two years, because it doesn't look like he really cares what the people think on Iraq. He's not budging.

The Democratic response was actually quite good. Not the usual, wishy-washy, focus group tested, middle-of-the-road, pseudo-opposition stuff they usually use. Sen. Durbin from Illinois gave the response. He came out strongly against any escalation, and said the President's plan is going in the wrong direction. He then made a smart political move by arguing that US goals have been achieved: Sadam is gone, there weren't any WMDs so...they're gone, the Iraqis had elections and chose a government. What more do we have to do? It's the old "declare victory and leave" sort of thing. I think that kind of argument can give cover to Republicans who want to abandon the President.

UPDATE: ThinkProgress has a video clip up of Bush's Iranian comment.
Posted by Dave Splash

I agree, Durbin did a good job. I especially like how he talked about what we've done for the Iraqis.

Like I said, he framed it in a way that can make moderate Republicans more comfortable abandoning the president. As long as they do something to stop the war.