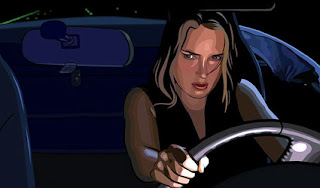 Because it was so fucking cold last night, my friends and I decided to stay in and watch a movie. We watched A Scanner Darkly. It was a good movie that dealt with the themes of drugs, paranoia, obsessive secrecy, and living in a police state, among other topics. I liked the movie, but I was thoroughly confused throughout. One of the bonus features on the DVD included a 1977 interview with author Phillip K. Dick who was explaining his novel. After listening to him talk, I started to "get it." I'd imagine that the movie is not quite as good as the book from which it came, but I don't know that firsthand.

It was good to see Winona Ryder back on screen -- I've always liked her. The bizarre style of live-action animation (or whatever you call it -- it looked like someone traced over the film) kind of ruined a Winona nude scene, but that is a minor complaint. This was no Blade Runner (another movie made from a Dick novel) but it was still a pretty decent flick.
Posted by Dave Splash

Yeah, I really like Wynona. She's a good actress and she's just damn nice to look at.

very good movie and Winona is great as Donna