Unhinged right-winger alert!! This might have to become a regular feature. Since last November's election, many right-wingers have come up with a new tactic to explain their defeat: it's all a lie. The polls are a lie, the media lies, the election results don't mean what they appear to mean, and a president with a 30% approval rating is actually supported by a "majority" of Americans. Thinking people know and understand that this is just sour grapes -- people who are unable to deal with the reality that their ideas were tried, and they failed. But right-wingers are tenacious, and they don't (usually) give up. Despite all of the factual evidence to the contrary, the right sticks with the same talking points. 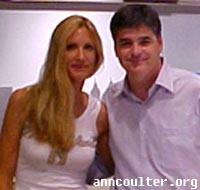 The difference now is the level of anger on the right. Here is a good example. On popular right-wing blog Blonde Sagacity, the blog's author gets all "Ann Coulter" on her readers and attacks all people who think the Iraq War is failing, and refers to them as the "fringe" (hard to be the fringe when the majority of the country is against the war, but that is another story). She then says that those who disagree with her position on Iraq, "make her ill."

"They have the right to say what they want, but I'm not gonna lie...I hate them. They are the antithesis of all that I believe and all that I want my children to experience in this country. I hate their bitterness and anger. I hate their screaming and frothing at the mouth. I hate their constant distortions of the truth. I hate that anything they say at any given time could be used as propaganda for our enemies. I hate that they lower the morale of our troops." (emphasis added) Sounds like the pot calling the kettle black to me. Look who's bitter and angry! Hey, elections have consequences, my right-wing friend. You lost. Deal with it. The US was able to defeat the Japanese and the Nazis in less time than it has taken for Bush's Iraq debacle to play out. Sometimes it is the best thing to admit a mistake and change course rather than continue to do the same thing and keep expecting different results.

The problem with dealing with the right is, they don't accept reality. To them, every fact that does not fit into their theory is "biased." Everyone who is not a rabid, Bush-worshipper is a "Bush basher" and therefore cannot be taken seriously. Anyone who thinks that Iraq is a distraction from the greater war on terror simply "does not understand" the problem. Etc, etc, etc. They have their outcomes pre-determined, so it makes any "inconvenient" facts easy to dismiss as biased against them. Lastly, the line about "lower(ing) the morale of our troops" is such a right-wing myth. How are the troops (who according to the most recent Military Times poll do not approve of Bush's handling of the war, but have high morale) affected by the American people exercising their free speech? How is it "pro-troops" to support a policy with a proven record of failure? How are American freedoms and values being promoted by silencing dissent?

I gave up reading right-wing blogs last Summer because the level of vitriol directed at Democrats was frightening. It seems that most right-wing bloggers hate liberals more than Osama Bin Laden! So, look what happens when I go back and try reading a right-wing blog after the election...same thing different day. They have the same anger, the same hatred, the same tired arguments...How sad. Being a sore loser is not very becoming.
Posted by Dave Splash

They hate OUR bitterness and anger? Man, sometimes the comments on Blonde Sagacity downright sicken me. And it seems like since November they seem to depise most Americans.

I can't even stand to look at Ann Coulter and standing next to Hannity makes it ten times worse... We understand your point, but at least get the picture of them OFF THIS BLOG...

Sorry Ken, she's part of your "coalition." That's a cross you'll just have to bear. She represents the modern day right wing in politics.