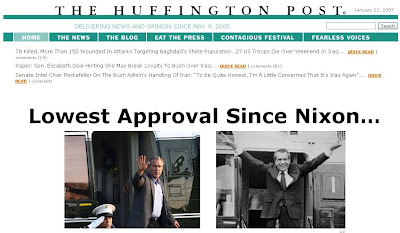 A Rage Against The Machine reunion!? SMN News (a heavy metal news website) is reporting that Rage Against the Machine may reunite for a performance at the 2007 Coachella Festival.

I am not one that usually tells you about the newest nude celebrity paparazzi photos (the topless shots at the beach, the upskirt shots getting out of a limo, etc.), but I will make an exception today. Egotastic has some topless pictures of Mena Suvari (American Beauty) from a weekend excursion to Miami beach. Nice. Where has she been lately? Does she still make movies?

Add Virginia Senator John Warner to the list of Republicans to say no the President's escalation plan for Iraq. Now we have all of the Democrats, plus Chuck Hagel (R-NE) and Olympia Snow (R-ME) saying no to this president. Warner's proposed resolution is said not to be as "confrontational" as the one proposed by Joe Biden (D-DE). Nebraska Democrat (though barely) Ben Nelson is co-sponsoring Warner's resolution. 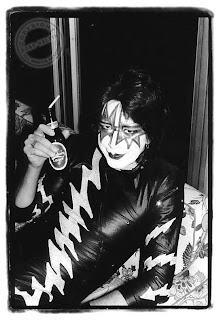 Rock photographer Ross Halfin has posted some vintage black & white pics he took of former KISS guitarist Ace Frehley on his website. The pics look to be from 1979-1981. Check them out here.

Way to go PETA!! Though I am not a member of PETA, I support many of their stated goals (especially when it comes to wearing animal fur). I love how they continue to torment serial fur wearer Jennifer "J-LO" "Jenny on the block" Lopez. During auditions for J-Lo's new reality show, two PETA members pretending to be auditioners took their turn on stage to verbally assault Lopez. TMZ has the video.

As the Bush Administration remains bogged down in the collosal mistake that is Iraq, more and more of Afghanistan is lost. The Taliban (the same ones Bush said were "on the run") are now opening schools in Kandahar. The schools' textbooks would be the same ones used in Afghanistan prior to the 2001 invasion. Glad to see Bush staying on top of things in this country. And would someone from the media cover this freakin' story!!?? No more stories on American Idol or OJ Simpson until you have covered Afghanistan! Deal?

I am the first to admit that I am no biblical scholar. However, I found this article quite interesting. It discusses a new film that makes the argument that the anti-gay interpretation of scripture is a "modern invention." It shows exactly how much money people like James Dobson and Pat Roberston have made over the last few years from gay-bashing. They have amassed great personal wealth and power, but have done little to nothing that can qualify as "Christian."

Director Robbie D said, “You can see things you cannot see with the naked eye. You see skin blemishes; you see cottage cheese."

I had an awesome show last night. Got a number of great calls -- one guy told me he "listens religiously." Cool. The playlist is posted here.
Posted by Dave Splash