Look Ma! No Mention of Tonight's State of the Union! 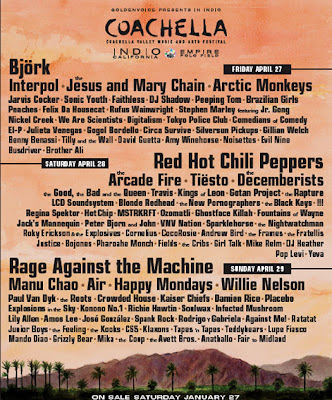 It looks like the "rumor" about a Rage Against the Machine reunion is now a fact. Coachella has Rage on its poster for this year's festival, and former Rage singer Zach de la Rocha confirms it on his website. The Jesus and Mary Chain will also be reuniting for this festival. 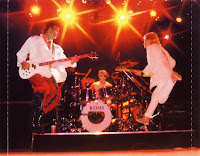 Side-Line.com is reporting of another prominent rock reunion. They are claiming that The Police will open this year's Grammy Awards show on February 11. I haven't found any other sources on this yet.

Here is a perfect example of the difference between a serious news organization (CNN) and a partisan propaganda outlet (Fox News). A few days ago, Fox ran all day with an unsubstantiated smear against Senator Barack Obama. They claimed he attended a radical, America-hating madrassa while living in Indonesia when he was six years old. Fox attempted to imply that Obama is a terrorist sympathizer. They offered no proof whatsoever, but added lie on top of lie, by floating a rumor that the Clinton campaign was responsible for the story. CNN decided to do what news organizations are supposed to do and investigated the story. It turns out that the story is...false. A classmate of Obama's said the following, "It's not (an) Islamic school. It's general. There is a lot of Christians, Buddhists, also Confucian. ... So that's a mixed school." Hmmm. That was hard. Investigating a story. How bizarre.

The lawyer for VP Cheney's former chief-of-staff Lewis "Scooter" Libby made his opening remarks today in Libby's perjury trial. Libby's lawyer is claiming that Libby was scapegoated by the Bush Administration in an effort to protect Karl Rove. "I will not be sacrificed so Karl Rove can be protected," is a line said by Libby to his boss, Dick Cheney. This trial is going to be huge!

VP Cheney's daughter Liz is a chip off the old block. She has an Op-Ed in today's Washington Post. Her article uses the exact same talking points and straw man arguments as her dear old Dad: 1) the only "courageous" thing to do is stay in Iraq indefinitely 2) the only "courageous" Democrat is Joe Lieberman (who is NOT a Democrat, by the way) and 3) "Beware the polls" -- public opinion is not something that should be acknowledged or cared about. The article is written with all the skill of a college freshman writing her first Civics paper. It is really bad.

If it seems impossible for an upstart coffee shop to succeed in a Starbucks-dominated world, then you haven't followed the plan of Cowgirl's Espresso in Seattle. Cowgirl's features scantily-clad hotties serving up your hot coffee with a smile. I think it is a winning formula.

Former Social Distortion bassist Brent Liles was killed last week when he was hit by truck while riding his bike. Liles was 43.

Israeli President Moshe Katsav has been charged with rape. The Israeli Attorney General has determined that there is enough evidence to proceed with a case against him. The case stems from the accusations of four female employees of the President. Despite the title, the "president" of Israel is largely a ceremonial position. The Prime Minister is the actual head of state.