It's Over For Marilyn Manson and The GOP! 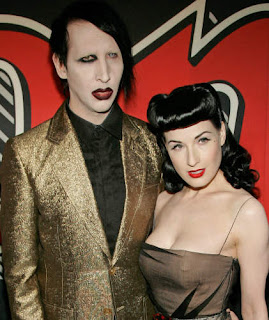 It looks like it may be curtains for the Dita Von Teese / Marilyn Manson marriage. The "burlesque model" is citing "irreconcilable differences" for the split. Apparently she has been trying to contact Manson to tell him for the last two weeks, but he has been unable or unwilling to talk to her. I'm guessing Von Teese will find a rock star not at the end of his career to hook up with next.

KISS' Gene Simmons was recently featured in the Wall St Journal. He commented on what his current favorite bands are. He picked White Stripes (good), but also said P-Diddy and Paris Hilton. WTF?!

An Australian bank has apologized for issuing a credit card to a cat named Messiah. The cat's owner decided to test the bank's identity security system and applied for a card under the cat's name.

As long as the Iraq War has been going on, it has been a familair mantra from the right that the "good news" from Iraq is not being reported, and that most of the bad news is fake, anti-Bush propaganda. The most recent case is that of an Iraqi policeman who has been a source for AP. He has reported some bad news: beheadings, sectarian violence, kidnappings, etc. Rather than deal with this firsthand, eyewitness account in a rational manner, crazed right-wingers like Michelle Malkin have decided that there is no such Iraqi source. Malkin is taking a trip to Iraq to "prove" that he does not exist. Problem is, the guy does exist, and because of all the undue attention he is receiving, he has now been arrested by the Iraqi government for talking to the media. I'm sure torture and prison will follow. Way to go, Malkin! I guess you proved that point. Will Michelle Malkin or any other right-winger admit they were wrong? Of course not. What planet have you been living on? Fox News, who ran with the "fake" story, reluctantly admitted that the AP has been "vindicated." They did this without acknowledging their complicity in advancing this story. 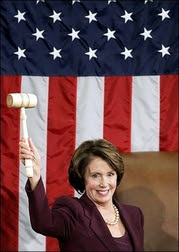 The Democrats officially took control of both houses of Congress yesterday. Nancy Pelosi is the first ever female Speaker of the House. Can I make a request? Can we (and by "we" I mean the media and the right wing) stop making references to Pelosi's clothes and appearance and passing that off as journalism or political discourse? Did anyone in the media ever comment on what that fat, dumpy, douchebag Dennis Hastert was wearing when he was Speaker? No, of course not.

Secondly, I want a moratorium on all Republican whining -- especially Republican House members! SHUT UP!! You had twelve years in charge, and during that time you refused to allow Democrats to add amendments to bills, refused to allow them in conference committees, kept votes open for hours to allow for extra arm twisting by GOP leadership, and ran the place like the Dems didn't matter. I never heard a single Democrat going on TV specifically to whine about it, yet over the last few days, numerous Republican House members have taken to the airwaves to cry about their "unfair treatment." GET OVER IT! As the right was so fond of saying after the 2004 elections, "Elections have consequences." You lost. The consequence of this is that you are not in charge, and you don't get to make the rules. You just deal with them. The "message" from the election was NOT that Democrats and Republicans need to work together better to advance the agenda of George W. Bush. The "message" of the election was that the GOP-controlled Congress was too corrupt and arrogant to remain in charge. You abdicated all of your oversight authority, and rubber-stamped the agenda of a failed President. No one made you do that -- you chose it. You have been nearly 100% wrong in everything you have attempted, so unless you plan to jump onboard to the Democratic agenda, shut up and leave us alone. You had your chance and you blew it.
Posted by Dave Splash