How About Making a Child Free Airline? 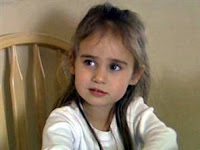 Sure this little girl looks pretty cute and harmless now, but should a temper tantrum from this little one cause her and her family to be kicked off an airplane? Yes. I'm sure this will spark some disagreement among those of you who read this blog, but I am going to go on record as saying that I agree with AirTran Airlines' decision to remove a family from a flight because their toddler refused to sit in her seat.

According to the flight attendants, the flight was already 15 minutes late, and the Massachusetts parents were unable to sit their child in her seat, fasten the seat belt, and quiet her down in order for the plane to take off. She kept climbing under the seats, crying, and hitting her parents. Now I don't know about you, but I absolutely can't stand children on a plane. I think there should be a special section (somewhere in the back of the plane) where all parents and their kids are forced to sit. I say this not because I don't like kids. I do like kids -- they can be funny, cute, interesting, and sometimes, surprisingly insightful -- but parents need to understand that no stranger is going to be as tolerant of your kid's misbehavior as you are.

You may be able to "tune out" your child's screaming or kicking or running around or whatever, but I am not. I should not have to be subjected to unpleasant experiences in restaurants, movies, flights, and shopping malls because you refuse to make even the slightest effort to discipline your child. I know it is not easy. Kids are not rational, I understand that. But either make an effort or leave the kids at home.

In the case of this particular flight, the parents seem outraged that after 15 minutes of being asked to do something (and accomplishing nothing), they were asked to leave the plane. How much more time should the airline have allowed the parents to try? Another 10 minutes? 30 minutes? An hour? How much would this additional delay effect the other 112 passengers on the plane? What about their connecting flights? What about their vacations or business trips? What about the burden it may place on their families or associates who are meeting them at their destination? I think the concerns of 112 people have to outweigh those of one family. I don't see how anyone could view this differently?
Posted by Dave Splash