How About a Free Ticket To Fallujah? 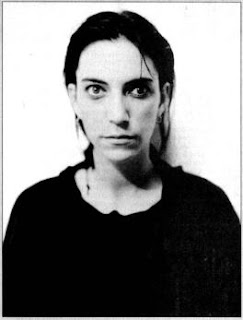 Seventies punk icon Patti Smith is going to record a covers album. She emerged on the national scene with covers of Van Morrison and Bruce Springsteen, but now 30 years later, she will release an album with songs by Bob Dylan, Jimi Hendrix, Jefferson Airplane, Nirvana, and Neil Young, to name a few. Patti's classic 70s albums will be re-issued in expanded form over the next year or so, as well.

According to White House Press Secretary Tony Snow, the president is able to ignore Congress whenever he feels it appropriate. “The President has the ability to exercise his own authority if he thinks Congress has voted the wrong way.” Hmmm. I did go to college, but I don't remember the class on civics that said the President can ignore the will of Congress just because he feels they voted the "wrong way." Did Bush add a signing statement to the Constitution making the other branches of government beneath him?

Republican presidential hopeful Rudy Giuliani is refusing to say whether or not he supports an escalation of the Iraq War. How can someone vie for the job of commander-in-chief and not have an opinion on the biggest military question of our time? UPDATE: Rudy is pro-escalation.

First Roseanne Barr and now Kelly Osbourne? What the hell is wrong with Playboy magazine these days? Ozzy's youngest daughter wants to pose nude for Playboy, but wants to make sure they "have some airbrushing on my tits." Yes, start there, but please do not end the airbrushing at that point.

There really isn't much in the news today besides the fact that President Bush is going to go on television tonight and defy the will of the American people by announcing an escalation in the war in Iraq. I am saddened by this prospect, and further saddened by the fact that the media keeps referring to this as a "surge" of troops. Surge implies a temporary situation, and this is not temporary. These new troops (plus how ever many more Bush orders once this new "stay the course part six" strategy fails) will be in Iraq at least until January 2009 when Bush leaves office. For those who are still believers in a "free and Democratic" Iraq, maybe you should consider taking this vacation trip to Fallujah. It looks like a good time.
Posted by Dave Splash