John Kerry is not going to run for President again. No big loss.

Sting's publicist is denying the rumor that The Police will be playing at this year's Grammy Awards and that the band will be re-forming in 2007. It could still happen, but now Sting is on the record saying it won't.

It's tough to have a democracy if none of the legislators ever show up for work. That is the problem with the Iraqi Parliament. The much-touted government (by the Bush Administration) is rarely able to hold any legislative sessions because virtually none of the lawmakers ever attend. "Parliament in recent months has been at a standstill. Nearly every session since November has been adjourned because as few as 65 members made it to work, even as they and the absentees earned salaries and benefits worth about $120,000." And these are the people that George Bush wants to have in control of the destinies of another 21,500 US soldiers!?

Hugh Hefner is passing on his opportunity to have Kelly Osbourne appear naked in Playboy. "We don't airbrush to that extent." 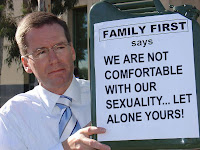 I feel stupid even mentioning this, but it brought up a question in my mind that maybe someone out there can answer. Actor Isaiah Washington (who stars on Grey's Anatomy, a show I have never seen) called one of his co-stars a "faggot" on the set. He then denied that he said it for a while before finally admitting he did and sort-of apologizing. This morning he was seen entering a "rehab" facility, apparently on orders from his bosses at ABC. What exactly is he going to rehab for? For being a homophobe? Are there rehab facilities for that? I don't remember hearing anything about this guy having a drug or alcohol problem. I'm just asking.

Look at the contrast between these two powerful women from last night's State of the Union. Nancy is all smiles while Condi looks like she is experiencing a bout of irritable bowel syndrome. Expect to see more of the IBS look on the faces of Republicans for the next couple of years.
Posted by Dave Splash

Thank you, John Kerry. Your campaign speeches are uniquely horrible. Thanks for sparing us.

Yeah, he's a good guy and he was qualified to be President (certainly more so than our current pres), but I am glad he is not running again.