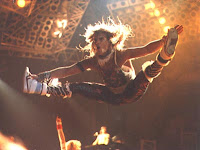 The Van Halen reunion with David Lee Roth is on! All sides are on the verge of signing all the appropriate contracts to make a 2007 Summer Tour a reality. Eddie Van Halen's 15-year-old son, Wolfgang, will be playing bass instead of original bassist Michael Anthony. The entire band (including Anthony and second singer Sammy Hagar) will appear on stage together to accept their entry into the Rock and Roll Hall of Fame.

So much for bi-artisanship! The Republicans in the Senate blocked a raise in the minimum wage yesterday, continuing their defiance of the will of the American people. Or, they honestly believe that $5.15/hr is enough money to raise a family. Either way, the GOP shows how completely out-of-touch they are with the American people.

Love God's Way, "a Faith based Ministry with the goal of spreading God's Love through teaching and healing," has assembled a list of "gay bands" that they advise their supporters to avoid listening to. Here is some of the list: Metallica, Wilco, Ghostface Killah, The Doors, The Strokes, Queen (well, okay, maybe), Rolling Stones, Jay-Z, Motorhead, Eminem, Nirvana, DMX, Bright Eyes, and on and on...There is no explanation of the criteria for making the list.

Did you think we were finally done with our worst-ever Defense Secretary, Donald Rumsfeld, after he was fired following last November's elections? Well, you were wrong. Rummy still has an office paid for by you and I, and is being provided with a staff of seven people, also paid for by taxpayers. Most former Defense Secretaries are given a transitional office to sort through their papers for a few weeks after their term. Rumsfeld was fired last November, yet he has not begun "sorting" until now. No explantion is being given for why this requires a staff of seven people. I have a theory, and it involves shredders. Lots and lots of shredders.

The first CD since 1988 to feature the original line-up of Dinosaur Jr is set to be released May 1st on Fat Possum Records. The disc will be called Beyond, and it will be followed by a live DVD shot during the band's reunion tour in 2005. 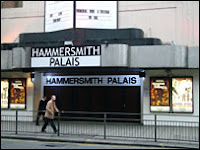 The Hammersmith Palais music venue (made famous in The Clash's "White Man In Hammersmth Palais") is scheduled to be demolished. The theater was built in 1919. The English government said the building was not historically significant enough to warrant saving.

Three days (so far) of students rioting in Beirut. How long before Israel is blamed for the whole thing?
Posted by Dave Splash

Frank Sinatra is on the gay list. I knew "Strangers In the Night" was talking about Central Park...