Can We Get A Little More Action For A Friday?

It has finally happened. Someone has decided to make a movie about the life of Kurt Cobain. The Cobain book, Heavier Than Heaven

, is now being made into a screenplay, and Courtney Love is handling the project. This will be the first "authorized" movie on Kurt Cobain.

I guess this is one way to avoid being sent to Iraq! Michelle Manhart, an Air Force Staff Sargeant, was recently relieved of duty for appearing in Playboy. Manhart, who is 30 years old, has been in the Air Force since 1994, and served in Kuwait in 2002.

In a clear sign that the military does not support Bush's plan to escalate the Iraq War, the president received a lukewarm reception when he spoke yesterday at Fort Benning in Georgia. The 300 soldiers who attended the speech were then ordered not to speak to the press afterward, so there wouldn't be any "discordant notes" coming from the military. 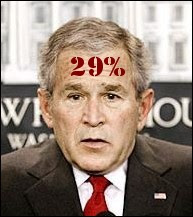 In the first major poll conducted after the president's Iraq escalation speech, Bush's approval rating has dropped to his lowest ever -- 32%. The approval rating for Congress is low, also, but it has begun to tick upward since the Democrats took control last week. When specifically asked about Bush's handling of the Iraq War (the central issue of his presidency) the number is in the 20s.

Jewish membership in Congress is at an all-time high in the new 110th Congress. There are 30 Jewish members of the House, and 13 in the Senate. All but four of the Jews are Democrats.

The concert scene in Omaha is hitting a bit of a dry spell. The next good show, in my opinion, is next Friday, January 19 at Saddle Creek Bar. Eagle*Seagull is playing along with Landing on the Moon and Kite Pilot. Eagle*Seagull is one of the best, and most underappreciated, bands from Nebraska (they will be touring in Europe throughout February). They deserve more support. Tickets are $5 at the door.

There is more thruth to this video than you will ever know...

I don't like the idea of the Cobain movie being made under the "direction" of Courtney Love. There was so much about the book, Heavier Than Heaven," that I didn't like because Courtney was so heavily involved. I don't like the idea of the same thing happening in the movie, because this is what is going to define his legacy for a lot of people. I really enjoyed Gus Van Sant's "Last Days," it was different, but I liked the way it was done. :)

I doubt I would like any movie dealing with Cobain, no matter who was doing it. Unlike other rock bio pics, I actually lived through this story. I saw Nirvana a number of times, I lived in Seattle, and I was living there when he died.

But the Courtney factor is going to make this one problematic. I never saw 'Last Days' but I will look into that one.