Air America Is Saved! AND Joe Lieberman Becomes The Republican He Has Always Wanted To Be.

Air America Radio is saved! They have a new financial backer, and the talk radio network will remain in business. Al Franken will be departing soon because it is looking like he will actually run for Senate in Minnesota against Republican Norm Coleman.

Joe Lieberman MUST BE STOPPED!! The "independent Democrat" Senator from Connecticut has said that he will not investigate fraud and inaction in the White House's reaction to Hurricane Katrina. Newsweek says, Lieberman "has quietly backed away from his pre-election demands that the White House turn over potentially embarrassing documents relating to its handling of the Hurricane Katrina disaster in New Orleans." The man is a Republican, plain and simple. He is a Bush toadie, and an embarrassment. "Last year, when he was running for re-election in Connecticut, Lieberman was a vocal critic of the administration’s handling of Katrina. He was especially dismayed by its failure to turn over key records that could have shed light on internal White House deliberations about the hurricane, including those involving President Bush." The voters in Connecticut should begin a recall of this loser immediately. If they wanted a Republican, they would have voted for one. Lieberman perpetrated a fraud on the voters of his state. 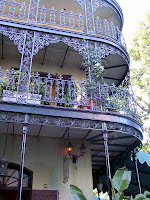 More on New Orleans: We all know that President Bush didn't see the rebuilding of one of America's most important cities as worthy of mention in the State of the Union, but did you know that the entire Republican Party thinks New Orleans isn't even worth any of their time? When the Senate Homeland Security and Government Affairs Committee toured New Orleans to see all the "progress," not a single Republican attended. This, of course, is not by accident. It is a concerted right-wing effort to diminish the significance of the failure of the Bush Administration. Now, the right-wing blogosphere is chiming in. Check out this typical right-winger's blog (Violence Worker) with the headline: Bulldoze New Orleans.

OK. The Police are getting back together to play at the Grammys. All the "denials" were bullshit. 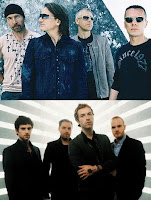 In their quest to be exactly like U2, Coldplay has enlisted Brian Eno to produce their next album. Eno and Daniel Lanois have been producing U2 since 1984.

Rogue Wave drummer Pat Spurgeon finally got his kidney. He underwent a kidney transplant operation on January 12. The operation was a success.

Sometimes this notion is forgotten amongst all the merchandising done by the guys, but KISS is actually a band. Yes, it's been nine years since their last new album, and three since their last tour, but they are a band. However, they are also comic book moguls now. They have just created a new comics company called KISS Comics Group.

Former Speaker of the House, Dennis Hastert (R-IL) is recovering from a recent operation. He had a small person removed from his stomach. Hastert ate the person sometime in 2006, and has been unable to fully digest it. No one noticed his extra girth because he was already such a fat-ass.

Are you a fan of nerdy girls? I am sometimes. Here is a blog called Babes With Books. It features, well....isn't it obvious?
Posted by Dave Splash

Yeah, it seems like the new owners are hoping to make 'Air America' more 'bar talk' than 'community forum' talk.

As for Coldplay - I really loved 'A Rush of Blood to the Head.' But it's not going to take much to make a better album than 'X&Y' - one of the most overrated pieces of crap I've heard this decade (see the 5-star review from Paste).

I think it's important for Air America to be out there. Here in Omaha, ratings for Limbaugh and O'Reilly are down -- big time. But the stations will not replace the shows or try ot "balance" what's on the air with a liberal host.

I imagine it is like that in a lot of markets. The conservative managers and owners of radio stations would rather lose money than put something else on the air besids those screaming right-wingers.