The cast of 24 was on Larry King last night, and they played a few clips from the upcoming sixth season. I was pretty pumped about the new season before, but I am beside myself now! Two nights in a row, and each night is two hours!? Incredible. In addition, one of the new cast members is Rick Schroeder. Ordinarily, that would not mean much to me. However, I have to give credit where credit is due. Schroeder came into the show NYPD Blue after it had been on for many years, and was a good addition. I'm hoping he adds something to this show. Author Stephen King has viewed the entire new season, and has written about it here. (it is a pdf file so you must have an Adobe reader to see it) 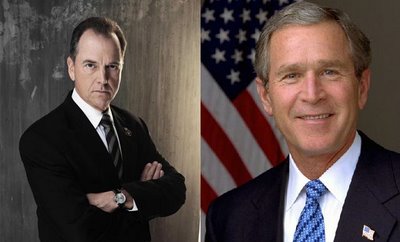 This season will also feature a new President. The sleazy, lying, and thoroughly corrupt President Logan will be taken away in handcuffs in the first episode, and Wayne Palmer (brother of former President David Palmer) will become President. Logan was so much like President Bush with his cowardice and his lying, that maybe this episode will serve as a softening of the public for kicking the real president out of his job (I know, I know...wishful thinking).

Don't attempt to contact me in any way this Sunday or Monday night -- I will be busy!
Posted by Dave Splash

Email ThisBlogThis!Share to TwitterShare to FacebookShare to Pinterest
Labels: 24, Bush

I wonder how long his committment to the show is? Will he get killed after only one season?

Loved from what I've seen from '24' so far. One thing that has always disturbed me is Rush Limbaugh's closeness to the show. I saw on CSPAN a few months ago, he was hosting a round-table discussion of '24' with the creators and some of the actors. Oh well... the fat man's bound to get one right every now and then.

I didn't know about that, but other conservatives have used '24' to try and advance their own politics. Laura Ingraham said the popularity of 24 "proved" that the US supports torturing detainees at Guantanamo. I was like, "WTF?"

I don't think the show supports any political idealogy. It's just an awesome show.