You Ignored My Command To See The Lemonheads? 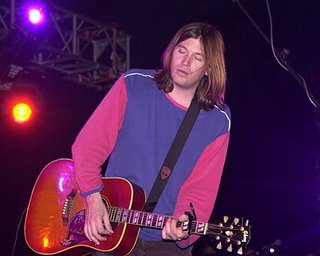 It seems that many of you out there ignored my command to see The Lemonheads last night. That's too bad, for you. You missed a fantastic show. The small crowd of about 100-120 seemed to really enjoy it, but I was pretty surprised that was all of the people who showed up.

I missed the very first band, The Hymns. I got to Sokol just in time to catch the set from VietNam. They were a pretty decent band. They all looked like they could be in the Grateful Dead or something. Their sound reminded me of a cross between My Morning Jacket and a slow, stoner rock band. I liked them, but it was hard to tell sometimes when one song ended and the next one began.

That was not a problem for The Lemonheads. The band hit the stage at exactly 11 pm. Evan Dando, who must be pushing 40 years old, did not look a minute older than he did when I last saw him 13 years ago! The guy has found some type of fountain of youth apparently. I know I don't look the same way I did back in 93.

The set was pulled from the new Lemonheads album, as well as all of their classic 90s records. "It's a Shame About Ray" "Hosptial" "Big Gay Heart" "My Drug Buddy" "Bit Part" and "Down About It" were all featured, and all got a great response from the small, but enthusiastic crowd. They played my personal, favorite Lemonheads song, "Ride With Me," which made the show as far as I was concerned.

After about 70 minutes or so, the band left the stage and Dando played an acoustic set. He played a few tunes (including at least one from his 2003 solo album) before abruptly ending "Into Your Arms" after only 30 seconds or so, and walking off the stage. I'm still not really sure what happened, but Dando must have been upset my something in the behavior of some of the meatheads in the front row. From my vantage point, it seemed like the group was just singing along (loudly and poorly, but that could not be helped I guess), but maybe they said something to Evan to make him mad. Regardless, the show was over without explanation.

All in all, I had a great time and enjoyed the show, despite the bizarre ending. The band, however, did not feature Bill Stevenson and Karl Alvarez from the Descendents. No idea who was in the band, I just know it wasn't them. I guess it could be chalked up to it being Monday night, but I was really disappointed by the turnout. Sokol is packed for crap like Tilly and the Wall, but barely 100 people show up for The Lemonheads? It's just not right.