Yes. It Is a Slow News Day 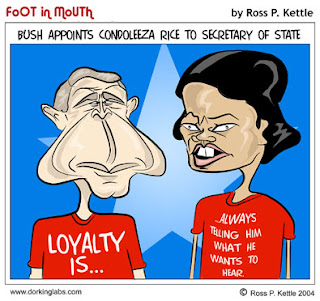 It has been nearly two years since Condoleeza Rice became Secretary of State for the US, and one would be hard-pressed to name a single diplomatic accomplishment of hers. Let's see, failure with Israel-Palestine, Iran, Russia, North Korea, Syria, Iraq (obviously), and absolutely no progress in Darfur. I know people want to like Condi, and criticism of her has been minimal, but really she has done a terrible job. Her time as National Security Adviser was even worse. Let's hope she soon returns to academia so she can't fuck up anything else.

How does the White House explain away their failure to capture Osama Bin Laden more than five years after 9/11? It's a "success that hasn't occurred yet," according to Bush Adviser Fran Townshend. It is almost pathological the way the Bush Administration refuses to accept responsibility for any of the things that have happened (or didn't happen in this case) during thier term. C'mon! A "success that hasn't occurred yet?" What the fuck does that even mean?

David Lee Roth has finally talked publicly regarding the Van Halen reunion tour in 2007. He said, "A Van Halen reunion is a lot like NASCAR -- are you there to see the winner or the crash?" TMZ.com has a video of the interview here. 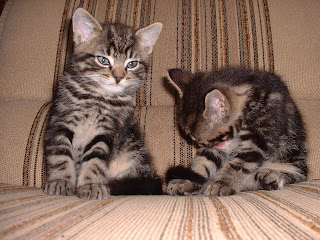 I am a total animal person. I love cats and dogs. Currently, I have two cats. One thing that always pisses me off is when people who are not cat fans claim that the animals don't really care about their owners. They make the (false) argument that all cats care about is getting fed, and they would not lift a finger (paw) to help you if you were in trouble. So, it's great to read a story about a cat that saved an entire family when he woke up his owner in the middle of the night to alert him that the house was on fire. The entire family was saved, and the damage to the house was minimal.

A German tourist (a really dumb one) got sent 8,000 miles out of his way when he accidentally typed the wrong city when purchasing his ticket online. The man thought he was going to Sydney, Australia, but ended up in Sydney, Montana.

At least somebody finally paid us back! Today the debt owed to the US from Britain for its assistance in WWII is officially settled. The Brits paid the final 55 million pound installment, hereby making the loan re-paid. Thanks.

This video is either very funny or very annoying depending on the kind of mood you're in.

Cats can be very loving and devoted pets. I think they are quite intelligent, they can sense their owners' emotions, and that every cat has a distinct personality. I think the key to having happy cats is giving them loads of love and attention when they are kittens. Our kitties are extremely trusting and friendly, and they make great little nursemaids when one of us is ill. My wife works nights, and I leave the door to the bedroom open so Baby Mackie can come in and cuddle, or so Abby or Bonnie can camp on the bed by my feet! Gotta love 'em!

Condoleeza Rice... arrrrgh. I wonder how much she might be able to accomplish if she didn't adhere to tightly to Bush doctrine. I have doubts she would do very well, regardless of her politics. When considering her, maybe we can find relief in the fact that she is far too close to Bush to really be considered a viable presidential candidate.

Re. Townsend's non-reality-based comments about not finding Bin Laden yet, we have a Dilbert cartoon on our refrigerator that shows Dilbert visiting his psychiatrist, complaining "All week I felt like I awas drifting through alternative universes. I was me but I was different."

The psychiatrist asks "Have you been near any dense objects that would make the fabric of space-time fold onto itself?"

The final panel shows Dilbert working at his computer with the boss standing behind him and asking "Will there be any unforeseen problems?" Dilbert's response is a confused "What's happening to me?!!"

I have to think Bush is a dense object which Fran Townsend to which has been standing way too close. Hell, unless fortune smiles on America, we still have 750 days of this nonsense left!