Why Are Mondays So Freakin' Long? 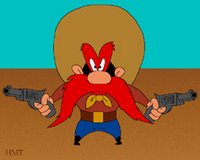 John Bolton is out. No...he hasn't come out. He's not gay. But Bush's disastrous choice for UN Ambassador has resigned. There was simply no way that he was going to get confirmed by the Senate, and his recess appointment is set to expire in a few weeks. I'm not optimistic that some sense of sanity will return to our post at the UN, as the right is floating some truly idiotic choices to replace Bolton. The National Review is pushing for Rick Santorum for the job. He might be the only person worse than Bolton for the post. Is there anyone on the right without his or her head up their ass? How could someone even suggest Rick Santorum for UN Ambassador? Hell, John Mark Karr would be a better choice. American conservatives are clearly deranged. 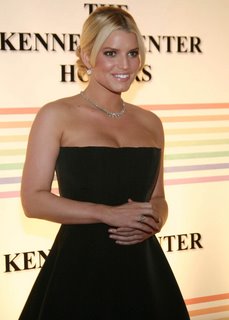 I obviously have a love/hate relationship with Jessica Simpson. To quote Borat, I'd love to "make sexy time" with her, but I'd hate to have to listen to her sing. I guess she had a pretty bad night last night at the Kennedy Center Honors show. She was part of the tribute to Dolly Parton, and came on stage to sing Dolly's signature tune, "9 to 5." She forgot the lyrics, said "so nervous," and tearfully left the stage. There was no applause from the audience. Ouch! Poor baby. I feel badly for people when stuff like that happens. Jess, if you need a shoulder to cry on, I'm here.

If you missed Meet The Press yesterday, you missed a great one. Russert got his balls back and seriously tore Bush National Security Adviser Stephen Hadley a new one. Watch some of the video here (a full transcript of the interview can be found here). That, my friends, is how one is supposed to interview a member of the Bush Administration. It is exactly the type of journalism that has been completely absent for the last six years. Nice job, Tim! 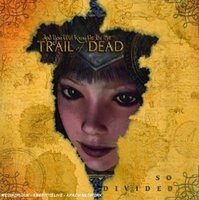 For those keeping track...it has now been 1,904 days since George Bush declared he would get Osama Bin Laden "dead or alive."

The new CD by ...And You Will Know Us By the Trail of Dead, So Divided, features a great cover of Guided By Voices' "Gold Heart Mountain Top Queen Directory." What a strange choice, but what a great one. Buy the CD here.

Last week, I hoped the GOP would nominate Newt Gingrich to be their candidate for president in 2008. Now though, I am "praying" that the party instead nominates Kansas Senator Sam Brownback. He's making noises about running. This is the guy responsible for the argument that microscopic cells frozen in a petri dish are just as much of a human being as your grandfather with Alzheimers. I hope he takes that argument all the way to a humiliating defeat in November 2008.

I had a really great show last night. In addition to being in a great mood while I was there, when I listened back to the show this morning, I didn't say anything especially stupid!! I also got three seperate calls from people who said my show is the best radio in Omaha. Love getting calls like that. My playlist from last night can be found here.
Posted by Dave Splash