This Week In Concerts

We have a pretty big week for concerts in Omaha coming up, so I wanted to make sure to at least mention all of the good ones. It's rare that I devote an entire weekend to seeing bands. I mean, I see a ton of bands, but I usually space them out a bit. I am hoping to avoid burnout by hitting Sokol three times in three days. Man, what a tough life. I know. 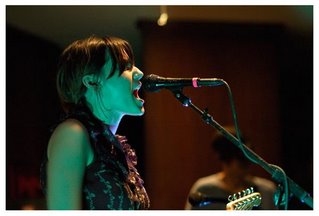 This Thursday, December 14, Ambulette will be returning to Omaha once again. They will be playing Sokol Underground with Little Brazil (who have a new song on their MySpace page, btw), and tickets are $8.

I have been praising Ambulette on this blog for almost two years. They started off with the name Bella Lea, but were forced to change their name a little over a year ago. When I first saw them, it was their seventh ever show. I could not believe that a band that tight had played fewer than 10 shows ever.

The band has come a long way in a very short amount of time. After touring for nearly a year straight, the band signed a contract with Astralwerks Records. 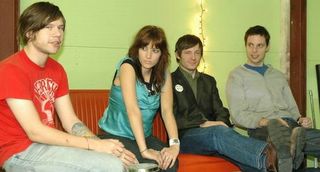 Their debut CD, The Lottery, was released in the Spring of 2006.

I would be disingenious if I didn't point out that initially I had a crush on lead singer Maura Davis. I still say that she is the most attractive woman in rock today. But my interest in the band goes much farther. Davis has a truly amazing voice in a genre (alternative or indie rock) that does not exactly require it. Furthermore, her songs are very personal and introspective. In the band's bio, she stated, "Pop songs today seem to be about things that have never happened to the person actually singing them. I miss being able to relate to the person singing the song." She alternates between guitar and piano depending on the mood she is attempting to create, and the rest of band perfectly compliments her no matter where the music goes.

The Lottery CD is only five songs, and three of them were on the "Bella Lea" demo CD that the band sold at shows in 2005. I need more songs! Ambulette's next CD is scheduled for a Spring 2007 release. But they will, no doubt, be playing a ton of new material at the show on the 14th. Do not miss this one. Get there early and get a good spot right in front of Maura, too! 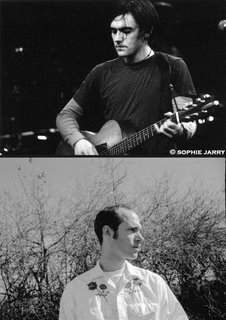 The very next night, Friday, December 15, the king of the Omaha music community returns home for a benefit concert. The show features Bright Eyes along with Simon Joyner & the Fallen Men, and The Bruces, and it is a benefit for the Bemis Center For Contemporary Arts. The show is at Sokol Auditorium, and it has just sold out.

It has been years since Bright Eyes played a venue as small as Sokol Auditorium (capacity 1500), so those who have only seen them at Memorial Park or The Orpheum will have a rare opportunity. The show is raising money for the Center's Artist in Residency program. Local legend Simon Joyner was in residence at The Bemis a few months ago, and he convinced Bright Eyes to take part in the benefit. The other participant is the one man band, The Bruces. The "one man" is Alex McManus, who also plays with Bright Eyes and Lambchop.

It should be a great show. I'm sure Bright Eyes will be playing a bunch of new material, as I hear recording has wrapped on their next album. Simon Joyner has a brand new CD out called Skeleton Blues. It's his tenth album. I interviewed Simon on my show last week, but due to technical problems, I wasn't able to air it. He did tell me that this new album is his first with The Fallen Men, and that he will have another record out soon that features the stuff he recorded while in residency. He recorded a series of duets with other artists that he was able to fly in thanks to the residency money from The Bemis.

The big weekend closes out with a two-night stand from The Faint at Sokol Auditorium. The Omaha band has been working on a new album in their new studio, and is supposedly looking for a new record deal. There was a rumor last year that the band had signed to American Recordings and was working with Rick Rubin as producer. That deal never fully materialzed -- at least The Faint and Saddle Creek deny it -- but the word is out there that The Faint is looking to leave the Saddle Creek label.

Regardless of what label The Faint records for, their local fans do not care. Both Faint shows for this weekend -- Saturday and Sunday night -- are Sold Out. That's better than last time they did two nights at Sokol where one night sold out, and the other didn't. I'll be at the Saturday show with openers Celebration and The Terminals. Sunday night I'll be doing my show, so I will have to miss the concert with openers Tilly & the Wall and 4th of July. But since I am not a Tilly fan, I think I get the better deal by seeing the Saturday show.
Posted by Dave Splash