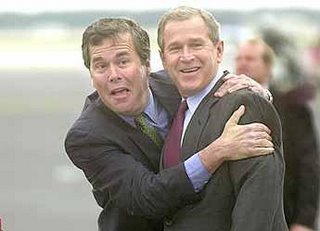 Jeb Bush (12/19/2006): "No tengo futuro" (I have no future). Finally!! A realistic member of the Bush family! "...the unpopularity and dismal job-approval ratings of his brother may have scuttled any plans Jeb Bush may have had for a future in politics after running one of America's most crucial swing states for the past eight years."

Right-wingers have gone so completely off-the-chain, batshit crazy since losing the midterm elections and staring down the barrel of approval ratings in the 20s for their hero's "leadership" in Iraq, that they are now advocating setting up detention camps for liberals. Popular talk show host, frequent Fox News contributor, and confidant of President Bush, Michael Gallagher said that the government should "round up" MSNBC's Keith Olbermann, actor Matt Damon, and The View host Joy Behar and "put them in a detention camp until this war is over because they’re a bunch of traitors." He was angry because Damon and Behar criticized George W. Bush and Dick Cheney. Man, wonder what he'd suggest for me?

Actress Lara Flynn Boyle got married in the most non-celebrity way possible. She and her husband walked into the County Clerk's Office, paid $36 for a marriage license, and got hitched. No massive ceremonies in Italian castles and no paparazzi. How novel. I've always liked Boyle ever since she was in Twin Peaks back in the late 80s.

Wilco mainman Jeff Tweedy will be touring in the South throughout January 2007. Check the dates and venues here. If he is playing in your town, do not miss the show.

In the "Who gives a shit" music news category, Limp Bizkit have broken up. I know, I know. Try to contain yourself. It's sad.

Could we get this in writing? Fox News consultant and Bill Clinton's former Republican adviser, Dick Morris, has said that he will "leave the country" if a Hillary Clinton / Barack Obama ticket wins in the 2008 election. I wasn't a Hillary supporter, but if it will get Dick Morris out of the US, then put me down for Hillary in '08!

I hate gameshows, but I may start watching Deal or No Deal with Howie Mandell now that I have seen one of his "models" on the show, Lisa Gleave. Wow. How does she dress on the show?

Being in the real estate business, I am in a better position to argue against right-wingers who attempt to tout the "Bush economy" as anything but a failure. When the housing market starts to sink, a recession is imminent. It simply defies all logic to cut taxes during a time when the country is engaged in two wars. The US has gone from the top creditor nation in the 70s, to one of the greatest debtor nations since the Reagan Administration. The cost of the war and the inflation on our debt is staggering. Most experts agree (except the ones that appear on Fox News) that we are headed for a recession. Renowned economist Steven Roach says the "odds of the U.S. economy tipping into recession are about 40 to 45 per cent," and NY Times economic columnist Paul Krugman says the odds are maybe "2-to-1". But Bush is continuing his "stay the course" strategy with the economy. Yesterday, in what has to be one of the least inspiring presidential appearances, President Bush told the country that 2007 will be a year that “require[s] difficult choices and additional sacrifices." How can we citizens help out? "Go shopping." That was the message after 9/11 and it is still the message now. That W is such an inspirational broken record.
Posted by Dave Splash

The really scary thing about what Gallagher said was that I'm sure he's probably serious. Even after an election where hatred of Bush cost the GOP the House and Senate.

He's hardly the only one. The right wing bloggers have gotten even more vitriolic towards the 75% of Americans that disapporove of Bush. I doubt detention camps are good enough for them. They want mass executions.