Paul Westerberg F&*ked Up His Hand 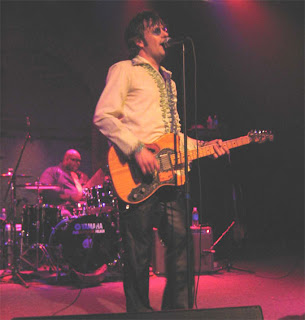 Paul Westerberg, former leader of the legendary Replacements, has seriously injured his left hand, causing nerve damage. According to Minneapolis' City Pages, "A week or so ago he put a screwdriver through his left hand trying to get some wax out of a candle and cut some nerves and ripped some cartilage and hurt himself pretty bad. He's in a cast. He's seen a couple doctors who say he won't be able to play guitar for a year."
Posted by Dave Splash

S*it, that's too bad. Westerberg has actually been enjoying a bit of a renaissance lately - his last few albums have contained some of the best stuff he's written since the 'Mats disbanded.

Long live the 'Mats. Gotta love "Don't Tell a Soul" and "All Shook Down". "Pleased to Meet Me" is pretty damned good too. I will have to check out some of Westerberg's solo stuff, I have never really bothered to check it out!

Too bad about his hand! Damn... I can't imagine what that would be like, as a musician, to have nerve damage in a hand. Hope he recovers!

Westerberg has really been having a renaissance lately, you are right.

Snave - check out any of Paul's more recent solo albums, 'Stereo' or 'Come Feel Me Tremble' or any of the stuff he has recorded under the name Grandpaboy.

I sure hope he recovers. It would be hard to imagine Paul never playing guitar again.