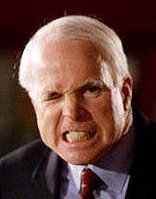 A couple of weeks ago I promised that I would try and cover every time the "maverick" John McCain sells-out to the Republican establishment. He has already flip-flopped on Roe V. Wade and on the intolerance of the religious right. Now he has hired Terry Nelson to be campaign manager for his upcoming presidential bid. Nelson is the genius behind the racist ad successfully used against Harold Ford Jr. in Tennessee -- the infamous "call me" ad. After that ad was pulled and condemned by virtually everyone not running for office as a Republican, Nelson was forced to resign from his post with WalMart who wanted to distance itself from the racism in the advertisement.

Good move, McCain! I guess it is now "maverick" to use racism to win elections. You're not embarrassing your legacy one bit, buddy.

UPDATE 12/8/2006: Nelson was also an un-indicted co-conspirator in the TRMPAC scandal with Tom Delay, and he was also James Toobin's boss during the New Hampshire phone jamming scandal in 2002. Toobin was convicted.