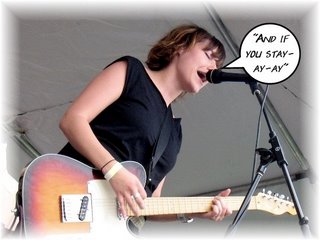 Turnout was a little light at the Ambulette / Little Brazil show last night - real light. I was suprised more people didn't turn out for Little Brazil at least. I think it has something to do with the fact that Bright Eyes and The Faint are playing the next three nights.

Still, the small crowd did not keep me from enjoying every minute of the Ambulette show. I saw Maura Davis briefly before the show and chatted her up regarding the new album. She looked great dressed all in black -- black jeans, t-shirt, and a ball cap -- and seemed to be in a decent mood. When the band got on stage to play around 11:00, I rushed to the front so I could be as close to Maura as possible (without appearing like a stalker, of course). 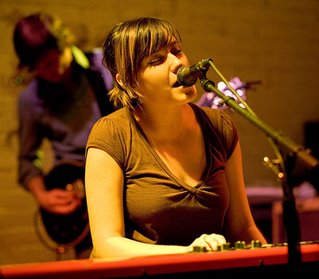 The band was tight as always. They played a few tunes from The Lottery CD, but most of the set was brand new material that will appear on their next album. The show's closer was definitely the best song of the night. "If You Go Away" is a seven minute slow song that gradually builds into a loud, crashing rocker that brought to mind Led Zeppelin's "Since I've Been Loving You." It was nearly that intense. For a while there it seemed like Maura was singing right to me while she was belting out this all-consuming tale of a desperate love that may never be. I felt like we were sort of bonding in a way. But then the song ended and I snapped back into reality. What a harsh comedown. I'll get you next time Maura Davis!

I did not see any of the first band Artsy Golfer. I think that one would have to know the guys in the band to really care. I don't and I didn't.
Posted by Dave Splash