Yes. I Have Seen the Borat Movie 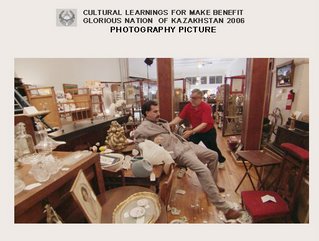 I finally saw the Borat movie last weekend. It was pretty much what I expected it to be. I have liked the Ali G Show since it started airing on HBO a few years ago, and I always thought that Borat was Sacha Baron Cohen's best character. I will say that the Borat stuff works better as a 5-10 minute part of a show than as an entire movie; but that does not mean that the movie is not good. I haven't laughed so hard during a movie in years. 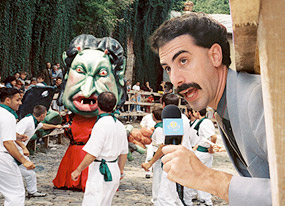 Borat reports on Kazakhstan's annual Running of the Jew
What I keep hearing from people who have seen the movie (but not the show) is their shock at the anti-semitism in the movie. Being Jewish myself, I did not find it shocking. Cohen himself is Jewish, and the character of Borat is playing off a stereotype of rural, small village dwelling, superstitious Eastern Europeans. I think the whole thing is one of the funnier aspects of the character. I just about died laughing when Borat reported on the annual Running of the Jew festival in his native Kazakhstan. I understand that some people might not really "get" the joke, but it is sort of the same thing as the Dave Chappelle's skits that make fun of racists (i.e. the blind, black klansman) and of black stereotypes. I'm sure plenty of people didn't really understand Chapelle, and those same folks probably don't really undertand Borat either. Besides, some of the stuff Borat says is way more offensive to women than anything he says about Jews!

Very funny movie. Sometimes people in America can be really naive about how prevalent anti-Semitism is in many parts of the world.

That is so true.