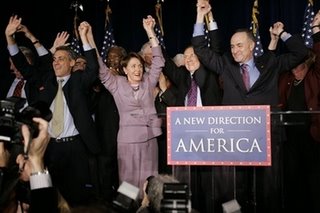 Resurgent Democrats win control of House
(AP) Democrats won control of the House early Wednesday after a dozen years of Republican rule in a resounding repudiation of a war, a president and a scandal-scarred Congress.

"Today we have made history," she said, "now let us make progress."

Lameduck Speaker Dennis Hastert, R-Ill., was elected to an 11th term, but several GOP officials said they expected him to step down as party leader and possibly even retire from Congress.

The White House made plans for President Bush to call the speaker-in-waiting, Pelosi, first thing in the morning; he will enter his final two years in office with at least half of Congress in the opposition party's hands.

"It's been kind of tough out there," Hastert said. Presidential spokesman Tony Snow observed: "It's not like a slap on the forehead kind of shock."

Democrats had captured 27 Republican-controlled seats, and no Democratic incumbent had lost thus far. Races were too close to call in more than a dozen seats, making it impossible to determine exactly how large the Democratic margin would be.

Still, 2006 already was an eerie reversal of 1994, when the GOP gained 54 seats in a wave that toppled Democrats after four decades. No Republican incumbent lost that year.

This time, Republicans fell from power in every region of the country — conservative, liberal and moderate — as well as in every type of district — urban, rural and suburban. Exit polls showed middle class voters who fled to the GOP a dozen years ago appeared to return to the Democrats.

Casualties of a Democratic call for change, three GOP congressmen lost in Indiana, three more in Pennsylvania, two in New Hampshire, one in North Carolina, one in Kansas, one in California and more elsewhere. Democrats won open seats, which were held by Republicans, in New York, Ohio, Florida, Arizona, Colorado, Wisconsin, Iowa and Texas.

Scandals that have dogged Republicans appeared to hurt GOP incumbents even more than Bush's unpopularity and the nearly four-year-old war in Iraq.

Republicans surrendered the Texas seat of former Majority Leader Tom DeLay, who left the House after being charged in a campaign finance scheme, the Ohio seat once held by Bob Ney, who resigned after pleading guilty in a lobbying scandal, and the Florida district of Mark Foley, who stepped down after the disclosure that he sent sexually explicit messages to male congressional pages.

In Pennsylvania, Democrats defeated Curt Weldon in the fallout from a federal corruption investigation and Don Sherwood who admitted to a long-term affair with a much younger woman who says he choked her.

"Today the American people voted for change and they voted for Democrats to take their country in a new direction, and that is exactly what we intend to do," Pelosi, who won an 11th term, told several hundred people celebrating in a Washington hotel ballroom.

A grandmother five times over, Pelosi vowed to restore integrity, civility and honesty to Capitol Hill and said: "Democrats promise to work together in a bipartisan way for all Americans."

As her remarks ended, U2's "Beautiful Day" blared and red, white and blue confetti drifted from above.

What a great day!

Now that the Democrats are going to be in power, I trust they going to address their own culture of corruption?

Reid (NV): Shady land deal that netted him $1.1 million for a house he hadn't owned for years. Oh, and don't forget about the Christmas bonuses he gave his staff by using campaign money. He called it a "clerical error."

Funny how these scandals haven't gotten quite the press coverage that the Republican scandals did. You could chalk it up to the fact that it was the Republicans who held the power in the Congress; that excuse is now gone. Your turn Democrats.

I have no interest in protecting William Jefferson if he did anything wrong, but he hasn't been charged with anything, so how can you just assume he's guilty of something inappropriate?

The claims against Murtha and Reid are bogus, and everyone knows that.

You guys lost, and you lost big. How about accepting it with grace and dignity, and accepting that the country wanted a change.

You got six years of total, one-party control and you blew it.

Hey Buddy,
You were the one talking about the corruption of the Republican party and failing to mention the Democrats. I don't need to mention Cunningham, et. al. because I'm glad they are removed when they are caught. You don't seem to have the same compunction toward your fellow Democrats - Oh, except Jefferson... one guy... wow.

No, the claims against Murtha and Reid are not bogus, and everyone does not know that. Your sweeping claims that you constantly make - "everyone knows that" - make you look like a ditz who is hoping that if you bluster enough, the stain will just go away.

Sorry to break this to you, but the Dems are just as corrupt as the Republicans were becoming. In no time flat, Washington will change them and they will get thrown out on their ear too.

Apparently I am more optimistic about the future than you are. I don't see the world coming to an end because some San Francisco liberal is third in line to the presidency.

I'm in a wait and see mode. I am not going to accept your notion that the dems are just as corrupt as the GOP. I haven't seen the evidence to warrant that. But, sure, we'll see in a few years if they are actually able to accomplish anything or if they get bogged down in earmarks and lobbyists.

I think the change in party control will be great for the country as a whole. If for no other reason than there really has been no congressional oversight on the war. I would think you would welcome something like that -- doesn't the right always preach about accountability?