It's election day. There are numerous instances of Republicans attempting to intimidate voters, supress voters, confuse voters, and otherwise disenfranchise anyone not a Republican. Check out Talking Points Memo, Huffington Post, Think Progress or DailyKos to read about it. I am going to focus on lighter stuff today. I already voted. 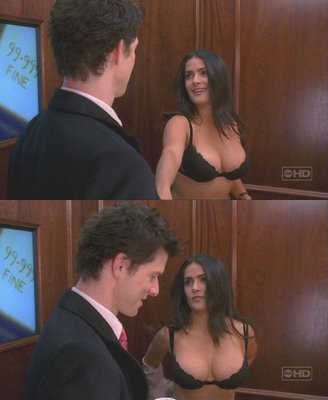 Apparently there is some new show on ABC called Ugly Betty that is being executive produced by Latin beauty Salma Hayek. In a blatant attempt to lure male viewers, the show recently featured a scene with Ms. Hayek stripping down to her bra in an elevator. Works for me! See the rest of the pictures here.

There is a little bit of former KISS member news. Former guitarist Ace Frehley recently played in a celebrity poker tournament along with members of Pantera, ZZ Top, Godsmack, and Anthrax. See the pictures here. Former drummer Peter Criss has announced plans for a new solo album called One For All. Peter is also planning on writing his autobiography, a childrens book, and record a swing music album. We'll see how much of it he actually gets done. 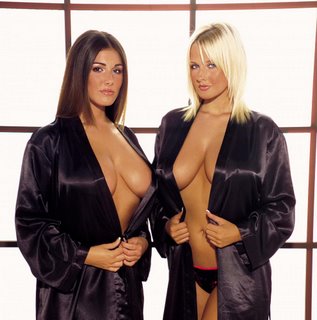 We have planty of bimbos here in the US, but the British take it to a whole other level. Hell, a girl with a great rack can become an overnight celebrity in the UK. These two "celebrities" - Lucy Pinder and Michelle Marsh -- are the newest Page 3 girls to take the country by storm. 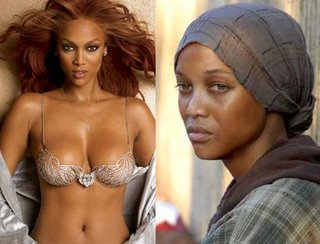 It would be very easy to hate Tyra Banks. She is a supermodel, after all. But I've always kinda liked her because she does not have one of those uber-skinny, boderline anorexic, 12-year-old boy bodies that so many of her peers seem to have. I have never seen Tyra's talk show, but I thought the picture on the right of her doing a "special" on homelessness was pretty funny. Homelessness is not funny, but a supermodel pretending to be homeless for a TV show is pretty funny.
Posted by Dave Splash