My Take on the Michael Richards Incident 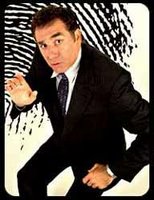 I am so torn about the recent incident regarding Michael Richard's racist outburst at a Los Angeles comedy club last weekend. I have liked Michael Richards for years -- long before he was Kramer on Seinfeld. He was great on the show Fridays, he was hysterical in numerous movies, and, of course, Kramer is one of the all-time greatest TV characters.

When I saw that video of Richards on stage, shouting the N-word repeatedly, without any comedic context (and I'm not sure there could be one), I was shocked and appalled. It is truly disturbing to hear anyone say that type of crap, let alone someone you have admired for a long time. I don't think there is really any excuse for what he said.

But he said it, and it was captured on film for all to see -- over and over and over. Unlike another famous person (Mel Gibson) who went on a racial tirade recently, Michael Richards is not blaming his outburst on drugs or alcohol. He did not deny the incident happened or claim the comments were taken out of context (like Gibson). He immediately went on national TV and apologized (unlike Gibson who merely issued a statement).

I don't want anyone to interpret this posting as some sort of acceptance of what Richards said, but I do accept his apology. He seemed very sincere in his appearance last night on Letterman, and looked very sad that the whole thing happened. He did not blame anyone or anything other than himself. He took full responsibility and asked for forgiveness. I think that is all one can really do.

I have never heard of any past racist incidents involving Michael Richards, and although I could not imagine ever saying anything like what he said, I have to imagine that this was an isolated incident. I hope he is not blacklisted in Hollywood or picketed at his future performances. I'm not sure what else to say about this.

A commentator on NPR raised a good point in that he asked what good is an apology if it isn't sincere - meaning some of what he said had to be what he felt, hence why else would those words come out so effortlessly?
After viewing his video, I kept thinking of Andy Kauffman's attempts to shock his audience - and it was like Richards was making an attempt to at least partially emulate Kauffman. But Richards is no Kauffman.

Anyway - great job with your Blog. Is it cool if I put a link to it on my blog?

I thought of Kaufman, too. And Lenny Bruce, maybe. But, yeah, he's not in that league. I think it was more of an outburst and not part of a bit. That's why I am so confused about it and don't quite know how to react.

I get the argument about his having those racist feelings and all, and that's hard to refute. But there have been no previous incidents that I've hard of, not even any rumors about this type of thing -- unlike the Gibson case where his father is a holocaust denier, and parts of his Jesus movie were deemed anti-semitic by many.

I'm not sure what else Richards can do to redeem his reputation. He may just have to stay at home and spend his Seinfeld millions in obscurity.

Even though he denied or didn't even mention the use of drugs or alcohol, do you think he could have been on drugs nevertheless? I'm just grabbing at straws here, trying to make sense of the unsensible.

I have no idea. It was just so unbelievable.

blaming something like this on drugs or alcohol is a cop out. apologizing and taking responsibility is the better way. that's why mel is a douchebag.

I'm not blaming it on drugs, I am wondering if it was a reason for his tirade where he otherwise wouldn't have done it. Blaming alcohol for wrapping your car around a tree and killing three other people doesn't excuse you either. I am looking for a reason, not an excuse.

Yeah, I see. Like he took something he doesn't usually take and ....BAM! The racist emerges. He hasn't said he was intoxicated and neither has anyone else. Surely, he's had to deal with hecklers before, too. My head hurts trying to figure this thing out.