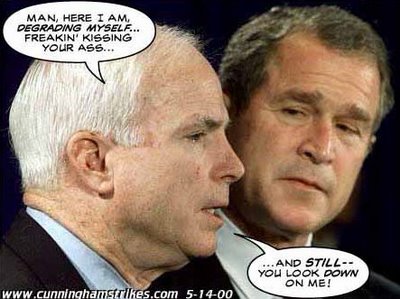 For a brief period of time, back in 2000, I actually considered voting for John McCain for President. Though I was a Gore supporter, and a lifelong Democrat, I really grew to like McCain for his "straight talk" and his disdain for the religious right. But the GOP chose the far less intelligent, experienced, and well-spoken George W. Bush as their candidate, thus ending my brief flirtation with the Republican Party.

In 2004, I thought McCain stood a really strong chance of defeating Bush and becoming president if he had run as an independent. He decided against it, and instead began pursuing a course of kissing George Bush's ring, and cozying up to the same religious right that only a few years ago he had called "agents of intolerance." McCain sold out to the very elements of the Republican party that keep millions of people from voting for the party -- Jerry Falwell, Pat Robertson, Tony Perkins, et al.

Now he is worse than Bush, in my opinion. At least Bush is sincere in his religious beliefs as far as I can tell. McCain hates those people -- always has. Yet he will sell out his principles to become the nominee for the Republican party. How sad. The former prisoner of war, the former maverick, the former uniter, is now nothing more than a mouthpiece for Jerry Falwell.

From this point on, I plan to document all of the instances of McCain's continued degradation of his legacy. Today, we have two shining examples. First off, McCain has hired Falwell agent Brett O'Donnell to his staff to advise on "communications."

Next up is McCain's total flip-flop on abortion. In 1999, McCain said he did not support the overturning of Roe v. Wade because he said it "would then force X number of women in America to [undergo] illegal and dangerous operations." Today, however, McCain is singing a different tune in order to get the nomination of the party that used to stand for freedom and less government intrusion into people's personal lives. McCain said this morning on George Stephanopolous's show that he now would welcome the overturning of Roe, "Just as I believe that the issue of gay marriage should be decided by the states, so do I believe that we would be better off by having Roe v. Wade return to the states." FLIP FLOP!

There will be plenty more of these sell-outs, I guarantee. McCain is willing to sell his soul to become president. I intend to make sure people don't forget what he used to be.

I'm with you, Howard. I was very interested in McCain prior to 2000. But he's gradually sold his soul trying to please the GOP base.

Absolutely brillaint. Thanks -
Yeah, I never thought of McCain as a pushover, but these last few months have greatly dimished his character. The John McCain I know (the one who said "there is no room for agents of intolerance like Jerry Falwell") would call the religious right's bluff and continue with his message. The half-million or so voters he risks alienating by his cave-ins are going to pale to the four or five million indepenedent voters who are turned off by such pandering.

Besides, these folks that he's courting will abandoned McCain as soon as Bill Frist comes into the picture faster than you can say "dittohead nation."

I don't know if it will be Frist, but it will be someone (Brownback?). McCain is making a huge mistake by getting into bed with those poeple (no pun intended). They won't fully accept him, and will abandon him when someone better comes along. But while he's kissing Falwell's ass, he is kissing away the support of moderates, independents, and Democrats. Someone in the GOP needs to stand up to those people and tell them that church is for Sundays, and we are not electing the national pastor, we are electing a President.