If You Thought Bush Supporters Were Crazy, You Were Right! Plus Some Other News...

You just knew this was coming...National Lampoon has made a "lost episode" of Seinfeld that makes fun of the recent controversy with Michael Richards. It's actually pretty funny. Watch the video here. In related news, black comedian Paul Mooney (collaborator with Richard Pryor, Dave Chapelle) has officially "retired" the N-word from his act forever. He said the footage of Michael Richards (who Mooney has known for over 20 years) was so disturbing to him that he has re-evaluated his belief on use of the word in comedy. He now says it's wrong for anyone to use it while on a stage. 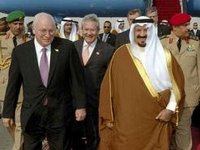 Though it was billed as an administration initiated event, the truth is that Saudi Arabia (the country that pulls the strings of the Bush Administration) ordered Dick Cheney to meet with them last week. According to today's Washington Post, "Saudi Arabia is so concerned about the damage that the conflict in Iraq is doing across the region that it basically summoned Vice President Cheney for talks over the weekend, according to U.S. officials and foreign diplomats." Interesting to see Cheney's true role as the House of Saud's errand boy finally coming to light. 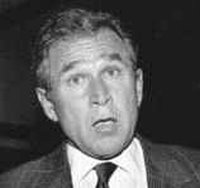 Are people who support George W. Bush mentally ill? Yes. According to a recent study at Southern Connecticut University, there is a direct correlation between support of George Bush and mental illness. The author of the study is a Master's candidate named Christopher Lohse. “Our study shows that psychotic patients prefer an authoritative leader,” Lohse says. “If your world is very mixed up, there’s something very comforting about someone telling you, ‘This is how it’s going to be.’” The study also states this completely obvious fact, “Bush supporters had significantly less knowledge about current issues, government and politics than those who supported Kerry.” This study mirrors a similar study done in the 1970s where psychiatric patients preferred Richard Nixon over George McGovern. 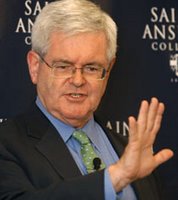 Former Republican Speaker of the House Newt Gingrich (who is also claiming he might run for president in 2008) is now saying that freedom of speech might need to be re-examined and a "different set of rules" put in place due to the threat of terrorism. He suggested limiting the freedoms of the internet. In the same speech, Gingrich complained about current campaign finance laws being a restriction on freedom of speech. Huh. So, we need a new set of rules to get past the 1st Amendment when dealing with citizens, but for politicians (to whom money = speech), they need to scrap all rules. Sounds like a solid platform for the presidency. I hope the GOP nominates him. 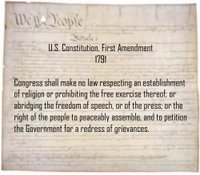 Speaking of the 1st Amendment, our Supreme Court has dealt a major blow to the notion of a free press. In a one sentence order, the Court has decided that the government can look into the phone records of two reporters for the New York Times. The case stems from a 2001 story in the paper about funding of terrorism. US Attorney Patrick Fitzgerald (the one the right attempted to destroy over his investigation into the outing of CIA agent Valerie Plame) has been unsuccessful in getting these records thusfar. I bet Fitzgerald becomes the new hero of the right since he is attempting to limit freedom of the press. We all know, the right believes press freedom ends when the president has an (R) after his name. 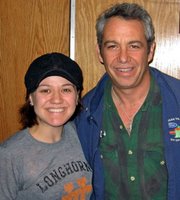 This is really frightening. Legendary bassist Mike Watt (Minutemen, fIREHOSE, The Stooges) recently played on a session with former American Idol winner Kelly Clarkson. Watt says, "The producer/engineer David Kahne is an old friend, and that's why I was asked aboard, though the guitarist and co-songwriter, Jimmy Messer, knew all about my history and was very enthusiastic; he's a great cat. Actually, it was pretty interesting. I didn't [know] what to expect, but [Kahne] had me trying all kinds of tripping stuff. Altogether, I played on six [songs]. They were already recorded, and I was replacing and adding in bass." I suppose a professional musician plays wherever he is needed. But Kelly Clarkson?! At least he didn't do it because he is a fan. "Everyone there gave me much respect even with me being nervous, big time at first. I knew nothing of Kelly Clarkson before this but can tell you, in my opinion, that she can sing her ass off."
Posted by Dave Splash