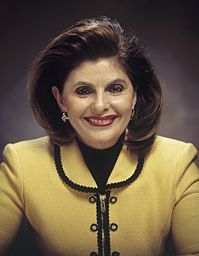 Allred was just on CNN. Now she is "representing" the two black guys who were the targets of Michael Richards' racist outburst. They are "not ruling out" suing him for money. Allred said they could sue Richards for "intentional infliction of undue stress" and "intimidation."

Look, Richards was wrong. But suing him for money? Doesn't that kind of cheapen the victims? Allred might believe that she has "substantial legal legs to stand on," but if Richards was just some redneck on the street who shouted the "N" word at these guys, would taking the redneck's money make his comments somehow okay? Man, I hate Gloria Allred.

Wow! Something you and I can fully agree on. I just watched the appearance Allred and her clients made on Hannity & Colmes. She kept playing this coy little dance about what exactly defines "justice" for her clients as she used the word. Even Alan Colmes was losing patience with her, and didn't seem too sympathetic toward the goals of Allred or her clients.

I think being disgusted by Gloria Allred crosses the political aisle.