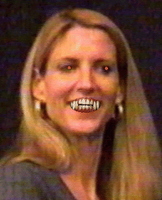 The Ann Coulter voter fraud investigation will be going to the Florida State Attorney this week. Extreme wingnut Coulter is accused of intentionally voting in the wrong district and knowingly giving election officials a fake address. Knowingly voting in the wrong district is punishable by up to 5 years in prison according to Florida law. Coulter cannot claim ignorance or confusion about the law because she is a lawyer, and because she ruthlessly mocked Florida senior citizens who made voting mistakes in the 2000 Presidential election.

Remember Cindy Margolis, "The world's most downloaded woman," (circa 1997)? She has finally posed naked, and she only waited until she was 41 years old to do it. She has posed for Playboy's December issue and the photos have leaked onto the internet. Find them here and here. In all honesty, Margolis looks pretty good. Her plastic surgeon should get glasses because he made her fake tits lopsided.

Lincoln, Nebraska garage rockers Brimstone Howl are signing with Alive! Records (former home of The Black Keys and Two Gallants) and Dan Auerbach of The Black Keys is set to produce. Sounds pretty cool. And since the band changed their name from the horrid Zyklon Bees, I don't have to cringe when talking about the band.

Is Ted Haggard, head of the National Association of Evangelicals and outspoken critic of gay marriage, a homosexual himself? A Denver area male escort says he has a 3 year "sexual business" relationship with the pastor, who also heads the 14,000 member Colorado Springs New Life Church. The escort, Mike Jones, says that Haggard has been paying him for sex for the last three years, and that Haggard frequently uses methamphetamine. "People may look at me and think what I've done is immoral, but I think I had to do the moral thing in my mind and that is expose someone who is preaching one thing and doing the opposite behind everybody's back," said Jones. My gosh, another right-wing anti-gay activist who is actually gay. Say it ain't so.

If the Bush Administration and the Pentagon have their way it will be a crime to report the truth about Iraq. A Pentagon spokesman told Fox News that it is considering filing criminal charges against the New York Times for releasing the information that the military itself says that Iraq is on the verge of total chaos. This information came just days after VP Cheney went on national television and told the American people that there is steady progress in Iraq and that violence is decreasing. Clearly, he lied. But is showing American citizens that the VP is a liar a crime? In this day and age, and with this administration, apparently so.
Posted by Dave Splash