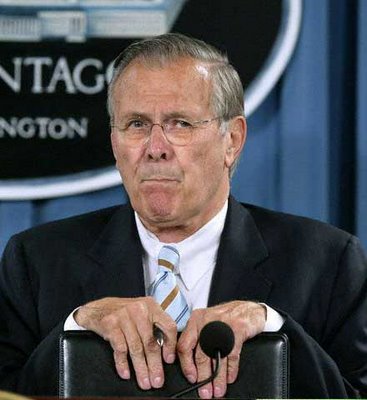 I didn't think it could get better than taking the House last night, but this news tops even that! The most incompetent person to ever hold the job of Defense Secretary is leaving. Hallelujah! Once Senator Macaca finally stops whining and just concedes the election in Virginia, we can get down to the business of beginning to repair some of the damage the six year Republican reign of terror has brought. This is the first election cycle since 1996 that I have actually been happy and optimistic. Unbelievable!

No doubt! The only thing sweeter than seeing Dumsfeld hit the street would be to see Cheney headed out right after him. That guy give arrogance a bad name.

Oh me, too. I had a good feeling about the Dems electoral chances this time around, but did not see this Rumsfeld thing coming at all.

The only way Cheney is leaving the White House prior to Jan 2009 is on a gurney. I think that is an unfortunate fact.

Like I said on my blog, is "Rummy" the best you lefties can come up with? I'm not defending the guy; I don't care about him one way or the other. I just always thought "Rummy" was pretty lame.

"Republican reign of terror"? Could you be more hysterical, and insulting to the people in history who have suffered true reigns of terror?

The way you bash the Republicans all the time, I can't believe you haven't been dragged out of your bed in the dead of night by Bush's jack-booted thugs.

insulting to the people in history who have suffered true reigns of terror? -- oh, you mean like the people in Darfur, or Liberia, or the Congo, or North Korea, or any of the of places that George W. Bush pretends don't exist? You are laughable.

Oh, yeah, and Rummy is a nickname that even his supporters use. It's not some insult I came up with. It's his name.

So Bush is conducting a reign of terror by doing nothing? You are laughable.

I always notice that the left wants Bush to take care of problems where we aren't, then as soon as we go there then your side whines that we are there.

No. Bush's reign of terror is all of his unconstitutional behavior of him and his administration. Abu Ghraib, putting torture into US law, secret prisons, illegal wiretapping, signing statements that Bush believes allow him to ignore laws he signs, increasing the tax burden on the middle class while giving tax cuts to the wealthiest 1%...

I could go on and on.