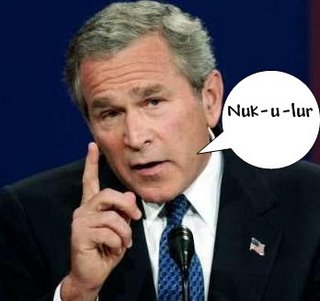 Let's see how the right tries to spin this one! Under pressure from the Republican members of the House Intelligence Committee to justify the Iraq War, the Bush Administration posted 1000s of confiscated documents from Saddam Hussein's government on the internet. Among those documents was a how-to guide to build a nuclear weapon! This proves that the Republican Party and the Bush Administration cannot be trusted to protect the American people. They may have just given nuclear weapons know-how to Iran, Syria, Al Queda, or anyone with an internet connection. Heckuva job, GOP!

U.S. Web Archive Is Said to Reveal a Nuclear Primer
(New York Times) Last March, the federal government set up a Web site to make public a vast archive of Iraqi documents captured during the war. The Bush administration did so under pressure from Congressional Republicans who had said they hoped to “leverage the Internet” to find new evidence of the prewar dangers posed by Saddam Hussein.

But in recent weeks, the site has posted some documents that weapons experts say are a danger themselves: detailed accounts of Iraq’s secret nuclear research before the 1991 Persian Gulf war. The documents, the experts say, constitute a basic guide to building an atom bomb.

Last night, the government shut down the Web site after The New York Times asked about complaints from weapons experts and arms-control officials. A spokesman for the director of national intelligence said access to the site had been suspended “pending a review to ensure its content is appropriate for public viewing.”

Officials of the International Atomic Energy Agency, fearing that the information could help states like Iran develop nuclear arms, had privately protested last week to the American ambassador to the agency, according to European diplomats who spoke on condition of anonymity because of the issue’s sensitivity. One diplomat said the agency’s technical experts “were shocked” at the public disclosures.

Early this morning, a spokesman for Gregory L. Schulte, the American ambassador, denied that anyone from the agency had approached Mr. Schulte about the Web site.

The documents, roughly a dozen in number, contain charts, diagrams, equations and lengthy narratives about bomb building that nuclear experts who have viewed them say go beyond what is available elsewhere on the Internet and in other public forums. For instance, the papers give detailed information on how to build nuclear firing circuits and triggering explosives, as well as the radioactive cores of atom bombs.

“For the U.S. to toss a match into this flammable area is very irresponsible,” said A. Bryan Siebert, a former director of classification at the federal Department of Energy, which runs the nation’s nuclear arms program. “There’s a lot of things about nuclear weapons that are secret and should remain so.”

The government had received earlier warnings about the contents of the Web site. Last spring, after the site began posting old Iraqi documents about chemical weapons, United Nations arms-control officials in New York won the withdrawal of a report that gave information on how to make tabun and sarin, nerve agents that kill by causing respiratory failure. (read the rest)

Just goes to show, these guys will do anything to stay in power. Even get us blown to smithereens.

I just watched some right-wing talking head try to spin this by saying that it proves we were right to go into Iraq -- that Saddam did have WMD. How they arrive at a positive result from one of the biggest GOP screw ups ever is so totally beyond me.

If you are worried that posting that information on the Internet could help someone build a nuclear weapon, then how do you discount the fact that it was Saddam's government that was in possession of those documents? They could read you know. It is you who are spinning like a top, sport.

I notice your other commentor was worried that the info that was posted could "get us blown to smithereens." How? Iraq didn't have WMD, and wasn't trying to acquire any, right?

Sounds like someone has a case of sore loseritis! America has rejected your negativity and your "blame the messenger" mentality in favor of a new direction. Deal with it.

As for your so-called "gotcha" about the documents. The nuclear stuff dates back to before the first Gulf War. No one disputes that Iraq had the makings of a nuclear program in the 1980s. Remember when Israel bombed it out?

The reality of it was that from 1991-2003 Sadam was contained, he was no longer a threat, and there was no need to invade Iraq.

But if you are not angry about members of Congress posting nuclear secrets on the internet, then you are either an idiot or are a diningenous partisan. I'll give you the benefit of the doubt, and assume it was the latter.

Either the documents were dangerous or they were not. You can't have it both ways.

Saddam was contained? You might want to talk to Billy Jeff and all his sycophants who were talking about what a WMD threat Saddam was when Iraq was bombed in 1998 right before the impeachment. Many of the same Democrats who in 1998, were talking up what a danger Saddam was, were some of the same Democrats who sound like you do now. I guess it all depends on what kind of letter is next the President's name. (R) BAD! (D) GOOD! What a simpleton.

If you think I have "sore loseritis" then you must not know me very well. You are really good at assuming a lot about me; you do it in every comment.

I think it is you that is attempting to have it both ways, my right-wing friend. You care absolutely nothing about the potential for those documents falling into the hands of Iran or perhaps Al Queda and giving them a 10 year boost to a potential nuclear program. You only care about trying to score points for a disgraced argument that has been disproven during the last 3.5 years -- that Saddam was actively pursuing a WMD program. He wasn't. Iraq was not a threat to the US, nor was it connected to 9/11, nor do I care if they have democracy there.

You like to bring up things that Clinton said in the 90s, but the key difference is that Clinton did not see enough "evidence" to launch an invasion. He correctly identified the real threat as Osama Bin Laden, and attempted to kill him. At that time, of course, it was simpletons like you that saw a (D) after his name and made claims about "wag the dog."

Don't try to re-write history, man. Iraq is a collossal blunder, and it is Bush's blunder. Oh, yeah, and he happens to have an (R) after his name.