What Did Rep. Lee Terry Know And When Did He Know It? 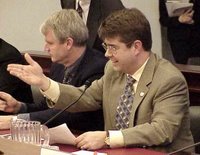 Omaha, NE – Jim Esch, candidate for Nebraska’s second congressional district, called into question the extent of Lee Terry’s (R-NE) knowledge of former Rep. Foley’s actions. “Lee Terry is an assistant deputy whip for the House GOP, a part of the House leadership. Did Lee Terry know about Mr. Foley’s improprieties in advance of the story breaking? That leads to the question of what did he know and when did he know it? The people of the district deserve an answer. But more importantly, since the issue involves our nation’s most precious resource, our children, it rises to the highest ethical standard,” said Esch.

Lee Terry’s website: Congressman Terry is one of just twelve Representatives appointed to serve on a “pool” of Members who review and resolve complaints relating to House ethics issues. This sensitive appointment speaks to the Congressman’s ability to impartially judge potential accusations of impropriety against his colleagues. The 2006 summer federal directory: Membership on the House Caucus on Missing and Exploited Children included Rep. Terry and former Rep. Foley.

“The fact that Lee Terry sits on a committee that reviews and resolves complaints of House ethics goes well beyond being able to deny any knowledge. If Terry was not aware then why is he sitting in a position that would have direct oversight into an issue such as this and not be doing his job?”

“Over the past year and a half scandal after countless scandal has occurred within the House GOP ranks.” Press reports this year have implicated Reps. Delay, Ney, Cunningham, Sherwood and now Foley.

“The country and people of Nebraska deserve better.”