Van Halen with Diamond Dave in '07? 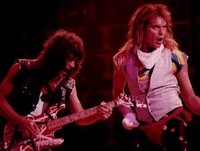 According to a posting on MelodicRock.com, Van Halen is expected to announce a 2007 reunion tour with David Lee Roth as singer. This would be good news except for the fact that this should have happened in 1996 when Roth re-joined the band for two new songs for a greatest hits CD. The Van Halen brothers chose to go with Gary Cherrone as the new singer rather than officially re-unite with Roth. Now they are all so old that I'm not sure how good this show will be. Also, as of now, bassist Michael Anthony is not in the band. The website suggests that Eddie's son, Wolfgang, might be playing bass instead. Lame.