Throw The Bitch in Prison 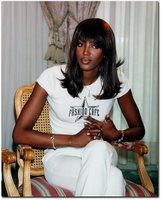 Supermodel Naomi Campbell has been arrested for assaulting her employees and/or personal assistants nine times in eight years. It's time to send this woman to prison. Anyone else on earth with this record of violence would already be there...

Naomi Campbell Bailed Over Assault Allegation
(Times Online) The supermodel Naomi Campbell returned today to a Central London police station where she was taken yesterday after being arrested for an alleged assault on a woman said to be her drugs counsellor.

Police said that she had been "rebailed" and would have to report back to the station in December.

"A 36-year-old woman who was arrested and bailed yesterday in relation to an alleged assault returned to the Central London police station this morning under conditions of the bail and has been rebailed to a date in the future," a Metropolitan Police spokesman said.

Ms Campbell was arrested at her home in Westminster yesterday lunchtime after an unidentified woman, reportedly her drugs counsellor, visited a London police station alleging assault.

The Sun reported this morning that the woman had "scratches all over her face".

A spokesman for Ms Campbell said last night that he believed there had been a "misunderstanding". He said: "We are sure it will all be sorted out when the police investigate."

The Streatham supermodel was discovered in Covent Garden at the age of 15. She quickly shot to fame, becoming the first black model to appear on the covers of Time magazine, and the French and British editions of Vogue.

Over the years she has worked with many top designers, fronting campaigns for Ralph Lauren, Versace and and Dolce & Gabbana, among others. She has also worked with top photographers including Patrick DeMarchelier, Herb Ritts and Mario Testino.