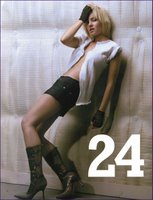 Tyrone Malone let me know about a new trailer for the sixth season of 24 which begins in January. Watch the trailer here. It looks pretty good, and somehow Wayne Palmer is the President of the United States! Huh? He wasn't even VP when last season ended. Perhaps he rides a wave of sympathy for his brother (former President David Palmer, who was killed by President Logan) all the way into the White House. However it happens, I am pumped for the new season.

Geez, I hope they don't bring Jack's daughter back. She's way cute but the character seems kinda stupid and self-centered.

I don't want her back on the show either, but damn, she was hot.