Despite Ken Mehlman's pathetic pleading to the NAACP last year that he and the Republicans were so sorry about their "Southern Strategy" of using racism to get votes, the RNC is at it again in Tennessee. They have nothing to use against Harold Ford Jr. except his race. In a new Tennessee ad, the RNC tries to wedge a few votes to the GOP's white candidate by imploring an old KKK trick of the "fear of a black man and a white woman." Notice the white bimbo winking and asking Ford to call her at the end of the spot.

A couple more things about this ad. First off, watching this ad away from a place like Tennessee, I see this as pretty desperate by the Republicans. The ad would have been more comical (and perhaps more effective) if the racial element hadn't been used. But the ad is not designed for the sophisticated voters of Tennessee, it is designed for the worst of the worst in Tennessee -- bigots. Second, who would ever believe that that woman would have been allowed inside the Playboy mansion!? The woman is gross. I'm certain that Ford would have better taste than that! Lastly, just about an hour or so ago, Ken Mehlman, chairman of the RNC, said that he has no control over the ad, and can't do anything about pulling it. The ad clearly states that it was paid for by the RNC, so how does he not have the authority? Because he is lying, and he is using the Southern Strategy that he "apologized for" last year. Hypocrite. If Bob Corker had any sense of decency, he would demand the ad be pulled. Sadly, he hasn't. 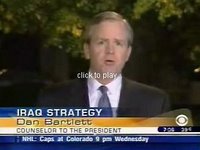 Man, is the White House getting desperate! Dan Bartlett, senior counselor to President Bush, said yesterday on the CBS morning show that the Bush Administration has "never" had a "stay the course" strategy. Never?! That has been the mantra of the Administration, the Republicans in Congress, right-wing talk radio and blogs, and every supporter of the Iraq War for the last two and a half years. Bush, himself, denied that he has ever supported "stay the course." Luckily, due to something called "videotape" the truth is easily available. Think Progress has a great video montage of Bush "never" staying the course here.

You certainly don't need me to tell you that today's mainstream pop music is probably the worst ever. In my opinion, The Black Eyed Peas are among the worst of the worst. BEP singer, Fergie, has a new "solo" record out, and her new song is a 100% steal of JJ Fad's bubblegum rap song, "Supersonic." That song was bad when it came out in the 80s, it's much worse now in 2006. See for yourself. Here is Fergie's "Fergalicious"

Sandy West (far right), drummer of the influential 70s girl-group The Runaways, died yesterday due to complications from lung cancer. She was 47. The Runaways are considered to be the first authentic all-girl rock group because they played their own instruments. Band members Joan Jett and Lita Ford went on to success as solo artists after The Runaways broke up in 1979. "Cherry Bomb" is the best known Runaways song. Here is a live clip I found of the band doing "Schooldays."

I guess the GOP decided to sacrifice their remaining 2%
black approval rating...