Paul Stanley On Tour, KISS On the Big Screen 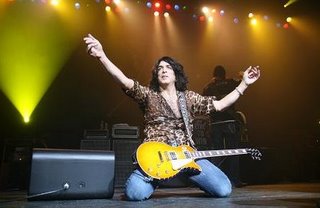 Paul Stanley's new solo album, Live To Win, was released this week. His club tour also started this week in Atlanta. The set list looked promising, as it included some older KISS songs that the band has never played live as well as songs from Paul's 1978 KISS solo album. Here is the set list from the opening night of the tour: Live To Win, Hide Your Heart, A Million To One, Got To Choose, Move On, Bulletproof, Tonight You Belong To Me, Lick It Up, Wouldn't You Like To Know Me, Magic Touch, I Still Love You, Strutter, Every Time I See You Around, Do You Love Me, I Want You, Love Gun, Lift, Detroit Rock City, Goodbye.

Also, tonight is your one and only chance to see vintage KISS on the big screen! This evening at 8PM, select theaters will be playing a KISS concert from 1975 on the big screen as an advance promotion for next week's release of the KISSology DVD set. To see if there is a theater near you playing this concert, check here. Sadly, it is not playing in Omaha.

Paul Stanley did an AWESOME show Monday ... Check out my blog for a review!