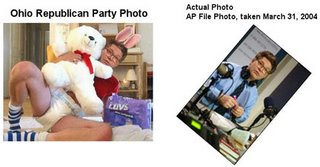 (Saw this at Think Progress) The Ohio Republican Party has reached a new level of desperation and depravity. In a new mailer designed to raise money for their on-the-verge-of-losing Senator Mike DeWine, the Ohio GOP has doctored/photoshopped a photo of Al Franken doing his Air America radio machine into a picture of Franken wearing a diaper and dressed up like a bunny.

The text of the message is also fundamentally dishonest. In the mailer, Franken is supposedly quoted saying that all conservatives should be poisoned and die. The problem with this quote is that it never happened. The "quote" comes from a book by right-winger Bernard Goldberg, who states in the book that the entire conversation between him and Franken was fiction. It was his attempt at satire, apparently.

The Ohio GOP is arguing that the quote is accurate and real, and then attempts to attack the Democrat running in Ohio (Sherrod Brown) for associating with someone who advocates violence against conservatives.

Is the Republican party so devoid of ideas that they have to make up shit to attack people with?