Have You Watched Dexter? 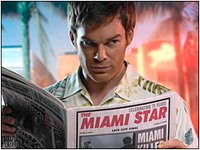 Hey there. Been staying at my folks' house for a few days taking care of their dog while they are away. In general, it is not a positive thing -- I'd prefer to be at home, and their dog is about 100 years old and has to go out like 40 times a day. But one positive thing is that they have different cable channels than I do, and I caught a cool, new show that I otherwise would not have seen.

I caught a new series on Showtime called Dexter. The show is seriously tweaked. It stars Michael C. Hall (who played David on Six Feet Under) as a serial killer who also works for the crime lab as a blood spatter expert. Showtime played the first four episodes last night in a row, and I got pretty into the show. It definitely has an original concept. What's even more strange is that Dexter (the main character) only kills people who have committed crimes and gotten away with them. He follows a code of conduct given to him by his adopted father who recognized that Dexter might be a future serial killer when he was still very young. While most parent's might have freaked out, Dexter's dad attempted to teach him to control his impulses and to focus them on, somehow, doing good.

The first two episodes can be streamed for free at Showtime's website. If my description doesn't turn you off, give it a shot. I wish I had Showtime. This is a pretty fucked up show, and I like fucked up shows.
Tag: Dexter
Posted by Dave Splash

Email ThisBlogThis!Share to TwitterShare to FacebookShare to Pinterest
Labels: Dexter

Anyway, I caught this joint too! After I heard the premise, I had to at least check out one episode. I'm hooked as well - Dexter is a deep a$$ show!