Do I Have a New Favorite Show? 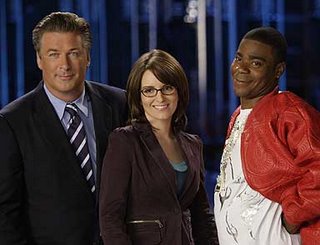 I just finished watching the first episode of the new NBC show 30 Rock. It's the other show that is about the behind-the-scenes workings of a "fictious" (SNL) late night TV show. I liked Studio 60 -- the first show -- initially, but have liked each subsequent episode less and less. I'm sticking with it...for now.

But back to 30 Rock. This looks like a serious candidate for new show of the year. It was absolutely hysterical. As I have mentioned previously on this blog, I kind of have "a thing" for Tina Fey. She is the star and writer for this new show. The character she plays is of the head writer of a late night TV show -- an obvious stretch. Her co-stars, Tracy Morgan and Alec Baldwin were also quite funny. I kind of liked Tracy's shortlived The Tracy Morgan Show from a few years back, and am glad to see him back on TV. As for Alec Baldwin, he plays a great know-it-all, arrogant TV executive.

I haven't liked any new sitcoms in years. 30 Rock could change all that. I watched a trailer for the next episode on YouTube and started laughing so hard I began to choke!

I forgot all about the show and was watching Comedy Central. Dang! I am generally not a fan of the Baldwin brothers, but I LOVE Alec's SNL stuff. I heard a good piece about this show on NPR this afternoon, and dammit, I was gonna watch! I will set the TiVo for next week.

Baldwin was great on this. Kind of the same character he played in that Jim Carrey movie, 'Fun with Dick and Jane' or something like that.

I think it's kind of bizarre how NBC not only has SNL but two shows (Studio 60 and 30 Rock) about producing an SNL-type show.

Glad to hear you liked it so much. I haven't seen it yet but I think Alec Baldwin is really funny. And also a great dramatic actor...his stuff in Glengarry Glen Ross was downright scary.