Another winning episode of 30 Rock last night. I'm telling you, there has not been a comedy this good in years. Last night's episode focused on Jack (Alec Baldwin) setting up Liz (Tina Fey) on a blind date with one of his friends. What he didn't tell her was that his friend, Thomas, is actually a woman named Gretchen Thomas. Gretchen was played by former Law & Order SVU babe Stephanie March.

The best line, by far, came when an angry Liz stormed into Jack's office to ask him why he thought she was gay. "What made you think I was gay?" she asked. "Your shoes," Jack responded. "They are definitely bi-curious. But you're not gay. Duly noted. I will change that in your file." 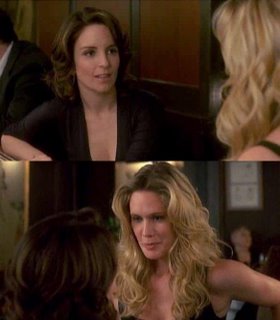 But it would be tough to find a hotter lesbian couple than Tina Fey and Stephanie March. Sadly, though, it didn't work out. They tried to have an "Oprah and Gayle" type of relationship, but ultimately, that didn't work either. That's too bad because Tina even offered to let Stephanie "do stuff to her" even though she wasn't really into the whole "lesbian sex thing." Great stuff.

Not enough Tracy Morgan in this episode, but I'm sure he'll be back in force next week.

If you haven't seen the show, NBC is playing the episode in it's entirety on its website.

I couldn't agree more. That show makes me laugh my ass off.

It's nice to see Tracey Morgan get this gig. I thought he was really funny on SNL.

It's probably the only sitcom I've watched in years.