What Is Wrong With You People?

Hasn't anyone seen Dateline's To Catch a Predator series on TV? I mean, really. How many people are still trying to hook up with 13 year olds in chatrooms? Obviously there are still plenty of pedophiles out there without cable TV. Yesterday, the head of human resources for conservative newspaper The Washington Times was arrested in a sting. He was busted for setting up a meeting for sex with a 13 year old girl. The "girl" was actually an undercover cop.

Sticking with the theme of sex that is just wrong, TMZ has a preview of the Screech sex tape that I mentioned yesterday. TMZ says: It was shot in a hotel. Diamond is holding the camera and narrating, as he engages two women in various combinations and positions. The tape begins with Diamond in a bathtub, narrating what's to come. It ends with Diamond introducing one of the women to a "Dirty Sanchez." Suffice it to say, it is unbelievably graphic.

Songwriter Paul Vance has died. Not familar with Vance's work? I bet you are. He is the writer of the 1960 classic "Itsy Bitsy Teenie Weenie Yellow Polka Dot Bikini." He also wrote some hits for Perry Como, but "bikini" was his only #1. 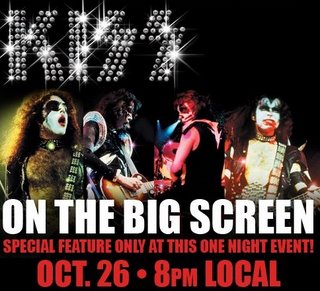 From Blabbermouth.net: KISS' classic live performance from the Cobo Hall in Detroit in 1976, along with footage of the historic "Kiss Day" in Cadillac, Michigan in 1975, will be given a special big-screen showing on October 26 at 8:00 p.m. local in select theaters nationwide. This special event is being staged to promote the much-anticipated "Kissology: Volume One 1974-1977" two-disc DVD set.

Due on October 31, "Kissology: Volume One 1974-1977" chronicles the early development of KISS. The item will contain six solid hours of unreleased footage along with live performances and four full concerts. The DVD is the first volume in what will be a definitive three-part collection, with the second and third installments slated for release in 2007. 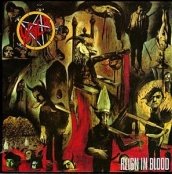 This is just weird. Tom Araya, lead singer and bassist for Slayer, said in an interview that he is worried about the effects of today's violent video games on kids. "Kids have become so desensitised to violence, you know? I saw this video game recently where the point was to sell drugs and kill as many people as possible. You've got to wonder what a child who plays that is going to be like in 20 years' time." He makes a valid point, I guess. The funny part is that Tom is the singer of such songs as "Praise of Death" "Necrophiliac" "Mandatory Suicide" "Dead Skin Mask" and "Jihad." I love Slayer, but maybe Tom Araya isn't the right guy to deliver the message that violent video games might warp young people.