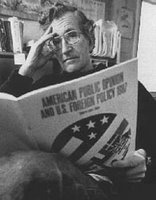 Attention Hugo Chavez: Noam Chomsky is still alive. It took the "paper of record," the New York Times, to confirm this, but Chavez's favorite writer is still among the living.

The Bush Administration has decided to sick the IRS on "liberal" churches. Why? Because Jesus was a war-mongering liar and anyone who says otherwise is "morally confused." Oh wait, Bush is the war-mongering liar and it is liberals who he says are "morally confused." Jesus was all about peace, love, and that all hippy stuff. So any preacher who dares to sermonize as much and question whether war is always the answer will now be under investigation by the Bush Justice Department. Very Christian, Mr. Bush. Very Christian. Bravo. 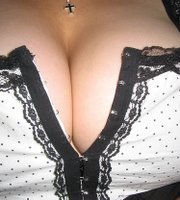 In Finland, it can cost as much as $32,000 to get to second base. Well that was until some judge (probably a liberal, right?) stepped in and said that a couple in their twenties had overcharged a 74 year old man with dementia for the priviledge of touching the woman's breasts. That must have been some rack! Now that you are all caught up on the important issues of the day, don't forget to check out Ladyfinger(ne) tonight at Sokol Underground. The band is releasing its debut full-length CD on Saddle Creek Records called Heavy Hands. Listen to "Smuggler" from the album. Opening the show is Criteria. See you there.
Posted by Dave Splash

It's fun watching George Allen trying to deal with this Jewish issue. Every day he seems to dig the hole a little deeper.

I am waiting for him to try and get sympathy votes for the Holocaust. George Allen sucks.