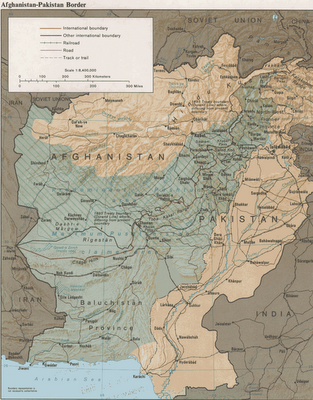 Pakistan: Hello al-Queda, goodbye America
(Asia Times)MIRANSHAH, North Waziristan - With a truce between the Pakistani Taliban and Islamabad now in place, the Pakistani government is in effect reverting to its pre-September 11, 2001, position in which it closed its eyes to militant groups allied with al-Qaeda and clearly sided with the Taliban in Afghanistan.

While the truce has generated much attention, a more significant development is an underhand deal between pro-al-Qaeda elements and Pakistan in which key al-Qaeda figures will either not be arrested or those already in custody will be set free. This has the potential to sour Islamabad's relations with Washington beyond the point of no return.

On Tuesday, Pakistan agreed to withdraw its forces from the restive Waziristan tribal areas bordering Afghanistan in return for a pledge from tribal leaders to stop attacks by Pakistani Taliban across the border.

Most reports said that the stumbling block toward signing this truce had been the release of tribals from Pakistani custody. But most tribals had already been released.

The main problem - and one that has been unreported - was to keep Pakistan authorities' hands off members of banned militant organizations connected with al-Qaeda.

Thus, for example, it has now been agreed between militants and Islamabad that Pakistan will not arrest two high-profile men on the "most wanted" list that includes Osama bin Laden, his deputy Ayman al-Zawahiri and Taliban leader Mullah Omar. (read the rest here)
---------------------------------------
Let me see if I understand Bush's great friend, Pakistani President Musharraf: he publicly pardons A.Q. Khan, the Pakistani nuclear scientist caught red-handed selling nuclear technology to North Korea and Iran, refuses to allow US military personnel to enter the country's tribal regions (where it is believed Osama Bin Laden has been hiding for years), and now he signs a truce with militants stating that he will not arrest Osama Bin Laden!? What happened to the "Bush doctrine" of treating terrorists and the nations that harbor them the same?

How can conservatives keep a straight face when stating that Bush is serious about capturing Bin Laden? He, clearly, is not. I have no idea why, but he apparently does not care whether he is caught or not. Sure, I can hear the right-wing echo chamber now: "Do you think that if Osama was captured then all terrorism would end? He's irrelevant. Al-Queda is 'on the run.'"

No. I don't think that if he was captured it would be the end of terrorism. However, it would be a huge symbolic victory for the US if he was caught and put on trial (or killed while being apprehended), and symbolism counts -- just ask the terrorists. Furthermore, al-Queda doesn't seem to be "on the run" unless by "on the run" you mean safely ensconced in a protected region of our "ally" Pakistan's mountains. They are not running. They are standing still and making fun of us.

Perhaps if Bush and Rumsfeld stationed more than a dozen or so guys in the area to track down and capture Bin Laden, we might have gotten him already. But, noooooooooo. We are stuck in the middle of the Iraqi civil war that we unleashed, because Bush just had to "set an example" for the Middle East. I guess they needed an example of incompetence and gross negligence. If this was a Democratic president, the right's blood would be boiling! I mean, a truce saying Bin Laden is off limits?! Even in the right-wing's delusional new docu-drama about 9/11, they didn't even invent Clinton doing something this bad.

I am of the opinion that Pakistan is no ally of the United States. They have been, and continue to be, a greater threat than Iraq ever was. Musharraf became the president through a military coup, promised a short transition to a new elected leader "soon", and then decided to stay indefinitely. How's that for supporting democracy? Just add this to the list of Bush Administration foreign policy blunders. Historians are going to have a field day with this guy!

Maybe capturing Osama wouldn't mean the end of terrorism. However, it would be a lot more important than us pulling Saddam out of the spiderhole.

It’s no difference. They get fast money and also enemies.
Like a burglar that is getting all the spread money from the floor and ears the police car coming:
-“All grab one more, I can do it…”

How many times we throw bread to the garbage? Surplus to us is some one’s daily need. It’s the very same with our country economical politics that are ruled by crooks.

We are verifying the same errors of the past but every new country leader seems to forget what they have learned in History classes.
I…believe they pretend to do the same thing only with new religions.

Why they don’t learn with the past errors of the other “big” civilizations and skip that wide open eyes too much greedy part?
Noooo!
”America is evil, kill America, let’s kill all mankind, AH AH AH AH”.
I feel for those innocents caught in the middle.
US of America isn’t the business men, is the people.
And leaders, all over the world, are declining education, actually it based on “get up on life by your own pulse, stomp and cheat and use if you need to, only because it’s what everybody thinks it’s needed!

Some one needs some classes of Civilization and, to be honest, can’t running with the devil, can’t do business with the Devil and then come to say “I was cheated” or “I didn’t know”.

Everybody is completely wrong, man.
Greed and speculation are getting faster and faster.

Running with the Devil.
VAN HALEN