I saw the most bizarre show Saturday night, and I'm still not sure what to make of it. A friend convinced me to go and see Thor the other night. I confess that I had never heard of Thor, and I only got half of the backstory when hearing about them. I thought Thor was some guy from Omaha that used to play in some early 80s goofball, power metal band; that he was a big, muscle guy that bends metal on stage, and that he made a few Conan the Barbarian-type movies. Well, he is not from Omaha, I found out that much. 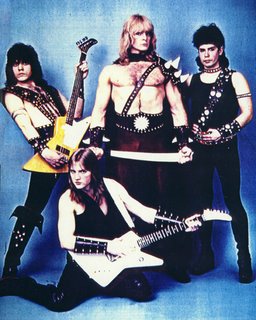 THOR in their early 80s heydey
Thor (the band) had a few records out in the late 70s and early 80s, and were pioneers (they claim) of the genre of "power metal". The band is really into bodybuilding and all of its album artwork features totally huge, totally ripped guys destroying shit. I thought Manowar invented this shit, but Thor says they were first. Thor is a largely forgotten band except for a few very strange collectors.

John Mikal Thor, the singer, parlayed his heavy metal fame into a B-movie career. At the show on Saturday, he played his signature film, Rock N Roll Nightmare. The movie is as bad as you could imagine. The story has something to do with Thor and band being sent to some remote farmhouse to record an album. Turns out, the house is actually the home of Satan or something like that. It was hard to follow. Thor, obviously, saves the day at the end of the movie.

Nowadays, Mr. Thor looks a bit different than he did in his bodybuilding glory days (who doesn't though, right). His band featured a couple of guys from Omaha, which is probably why I thought he was from here. He still puts on the whole power metal spectacle, complete with metallic masks, lots of leather, and assorted Middle Ages style weaponry. The band's best known songs (based on the crowd reaction when Thor announced the titles) were "Let The Blood Run Red" "Warhammer" and "Only the Strong." Man, I liked some dumb metal when I was a kid, but I never liked stuff this corny. The full story of Thor can be read here.

The 50-60 people in the audience seemed to enjoy it. I'm not sure if they thought they were in on some joke, but most of them didn't seem like the Thor-listening type. Guess you can't judge a book by its cover. 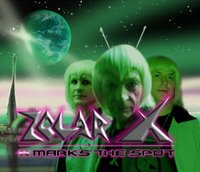 In between Thor's movie and his live concert was opening act Zolar X. Apparently, these guys had some buzz in Hollywood in the late 70s. They claimed they were from outer space, and supposedly wore their stage costumes 24-7. At some point in the late 70s a teenage Jello Biafra saw the band in concert and it made a strong impression on him. His label, Alternative Tentacles, released the only compilation of songs from the band. The band wasn't bad. They played with a surf-punk style, but seeing a bunch of 50-something guys wearing tights, outer-space make-up, and alien wigs made them hard to take seriously.

The whole show was pretty goofy and, at times, difficult to watch. Honestly, I wasn't sure if the bands were trying to be corny and were "in on the joke," or if the crowd was there to have a little fun at some aging power metalhead's expense. Either way, it was very different Saturday night.
-------------------------------------
Another take on the Thor in Omaha experience can be found here.

I went to the Zolar website. You gotta admire that kind of psychotic dedication.