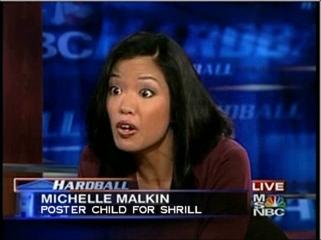 This is extremely interesting. Apparently, in Indonesia, the country's highest court has just sentenced three terrorists to death for their role in a massacre that killed over 200 Muslims. The terrorists happen to be Christian. Sentencing terrorists to death sounds like something the right would support, eh? Well...not so much.

Right-wing whiner-in-chief Michelle Malkin is leading a one nutjob crusade to free the terrorists. What could possibly be her rationale for saving their lives? They are Christians, of course. Oh, and something about their receiving an unfair trial, and being tried with questionable evidence. Malkin then suggests that this case be taken to the International Criminal Court in Geneva. Geneva?! But I thought only those who are "soft on terrorism" or "terrorist sympathizers" support an idea like that. Malkin routinely mocks those who support fair trials for terrorist suspects, and those who question America's terrorist detainee policy.